h/t Bloke Down The Pub 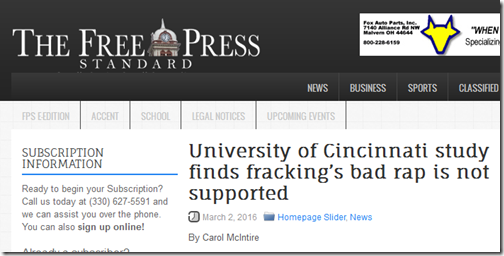 Apparently it is not only Mikey who wants to hide the truth from the public.

Dr. Amy Townsend-Small, the lead researcher for the University of Cincinnati Department of Geology, released the results during the Feb. 4 meeting of the Carroll County Concerned Citizens in Carrollton.

During her presentation, which was videotaped and is available for viewing on YouTube, Townsend-Small stated, “We haven’t seen anything to show that wells have been contaminated by fracking.” A three-year study by the University of Cincinnati in Carroll and surrounding counties determined hydraulic fracturing of oil and gas wells like the Rex Energy well shown above, does not contaminate ground water.

When asked at that meeting if the university planned to publicize the results, Dr. Amy Townsend-Small, an assistant professor at the University of Cincinnati Department of Geology and the leader of the…