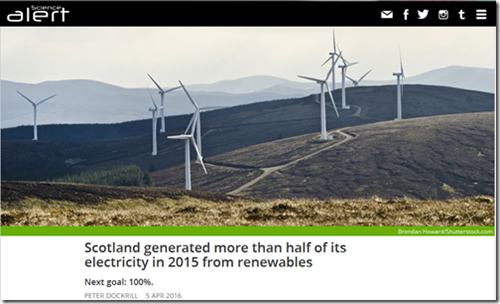 Readers will recall yesterday’s post, Scotland generated more than half of its electricity in 2015 from renewables.

I was kicking myself afterwards, as I should have more accurately titled it “Scotland generated most of its electricity from nuclear and fossil fuels in 2015”!

I have a few more thoughts on the matter:

The article in Science Alert (no, I have not either) comments:

“This is great news and an important step in creating a fossil-free Scotland. Despite the UK government’s ideological assault on renewable energy, Scotland is storming ahead, smashing through our 50 percent target for 2015,” said director of Friends of the Earth Scotland, Richard Dixon. “Clean, green energy is essential in the fight against climate change and Scotland needs to continue to be a champion of renewables while David Cameron continues to chase the nuclear dream in England.”