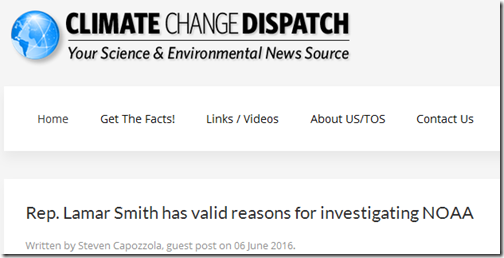 Reading the news lately, one might think that Rep. Lamar Smith (R-TX) is some sort of backwards character from the 19th century, a “member of the Flat Earth Society.” So great is the venom directed at him that the UK’s Guardian has referred to him as a “Witch Hunter.”

But what exactly is Smith’s crime?

Under his authority as chairman of the House Science, Space and Technology Committee, he’s chosen to investigate the research methods of the taxpayer-funded National Oceanic and Atmospheric Administration (NOAA).

Last year, NOAA released a study that found there has been no “pause” in recent global warming. Because the findings contradict every other set of observed data on global temperatures, and were issued ahead of the Paris Climate summit, Smith wants to…