For some time now we here on Energy Matters have been harping on about the prohibitive costs of long-term battery storage. Here, using two simplified examples, I quantify these costs. The results show that while batteries may be useful for fast-frequency response applications they increase the levelized costs of wind and solar electricity by a factor of ten or more when used for long-term – in particular seasonal – storage. Obviously a commercial-scale storage technology much cheaper than batteries is going to be needed before the world’s electricity sector can transition to intermittent renewables. The problem is that there isn’t one.

Making detailed estimates of the future costs of intermittent renewables + battery storage for any specific country, state or local grid requires consideration of a large number of variables, plus a lot of crystal-ball gazing, and is altogether too complicated an exercise for a blog post. Accordingly I have made the following simplifying assumptions:

* The grid is an “electricity island” – i.e. no exports or imports.

* It starts out with 30% baseload generation and 70% load-following generation . Renewables generation, including hydro, is zero.

* Enough battery storage is added to match wind + solar generation to annual demand based on daily average data. Shorter-term variations in generation, which will tend to increase storage requirements, are not considered. Neither is the option of installing more wind + solar than is necessary to meet demand, which will have the opposite effect but at the expense of increased curtailment (see this post for more details).

On future costs I made the following assumptions:

* Batteries: The best estimate I came across was in an article from Bloomberg New Energy Finance, according to which:

The global (battery) energy storage market will grow to a cumulative 942GW/2,857GWh by 2040, attracting $620 billion in investment over the next 22 years.

Case 1 applies the assumptions listed above to wind generation, solar generation and demand in Germany in 2016 using daily average data from P-F Bach.

Figure 2 compares combined wind + solar generation during 2016 with demand. Adding solar to wind tends to flatten out annual generation but does not make it an ideal match to demand:

Figure 3 compares 2016 demand with combined wind + solar when wind + solar is factored up so that it generates 100% of total annual demand. Generation broadly follows demand during the year but the erratic wind generation creates periodic surpluses of up to 80,000 MW and deficits of up to 50,000 MW:

The first graphic on Figure 4 plots these surpluses and deficits. There is no well-marked seasonal pattern. The second plots the GWh of storage needed to match these surpluses and deficits to daily demand. Here we see a seasonal pattern, with surplus energy generated from wind in the winter and spring having to be stored in the summer for re-use in the coming winter, and with storage capacity reaching a maximum of slightly over 25,000 GWh (25 TWh) in May. Given the erratic nature of wind generation, however, this pattern might change if a different year were considered: 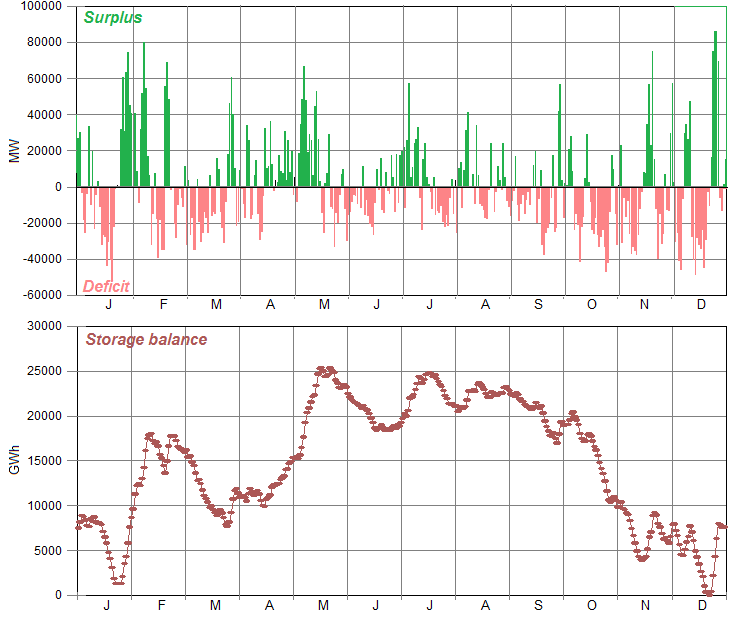 Figure 4: Case 1 daily surpluses, daily deficits and storage balance. Note that the Y-scale is in GWh

Case 2 applies my assumptions to wind generation, solar generation and demand in California in 2017 using daily average grid data from the California Independent System Operator (CAISO) supplied earlier by correspondent “Thinks Too Much”.

Figure 6 compares the sum of wind & solar against demand. Summing the two results in a pattern that broadly matches the summer peak in demand but not the “air-conditioning” peaks in June, July and August:

Figure 7 compares 2016 demand with combined wind + solar when wind + solar is factored up to generate 100% of total annual demand. There are large surpluses in the spring and early summer months and large deficits in the winter months:

The first graphic on Figure 8 plots these surpluses and deficits and the second shows the GWh of storage needed to match them to daily demand. The large surpluses from mid-March through the end of June and the large deficits in November through February combine to generate a storage requirement for Case 2 that also approaches 25,000 GWh (25 TWh) even though demand is only about half of Case 1 demand: 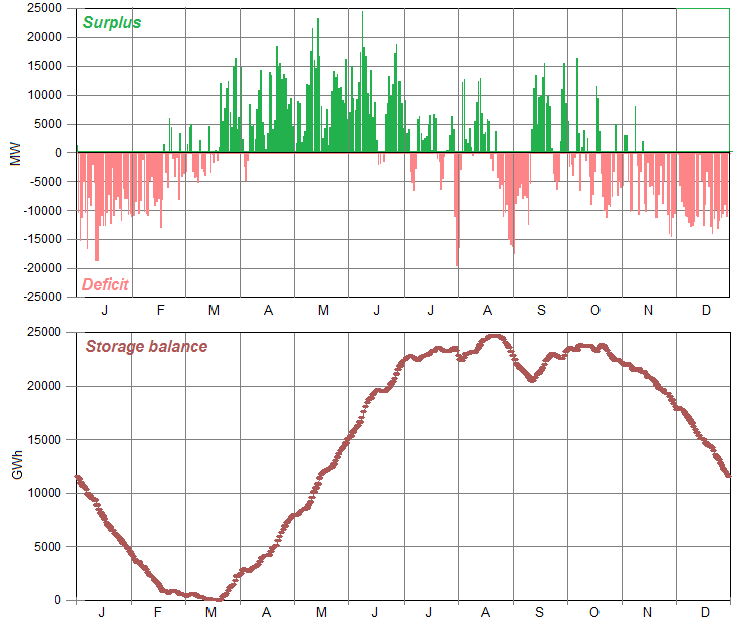 Figure 8: Case 2 daily surpluses, daily deficits and storage balance. Note that the Y-scale is in GWh

Now to costs. I estimated the combined wind and solar levelized cost of electricity (LCOE) without storage from the NREL LCOE calculator using the following assumptions:

Other variables were set to zero or ignored.

The combined wind + solar LCOE without storage was $50/MWh, broadly in line with Lazard’s 2018 estimates for utility-scale solar and wind.

I then estimated wind + solar LCOEs with battery storage capital costs included. This was a straightforward exercise because reducing baseload + load-following generation in direct proportion to the increase in wind + solar generation results in LCOEs that are the same regardless of the percentage of wind + solar in the generation mix. The NREL calculator showed:

Despite claims to the contrary battery storage is clearly not an option for a low-cost 100% renewable future. And lest I be thought a lone voice in the wilderness, a recent report by the Clean Air Task Force confirms that my estimates are in the ball park. And the CATF is of a distinctly green persuasion:

Every year people produce almost forty billion tons of carbon dioxide that is pumped into the atmosphere – that’s a hundred times faster than the Earth has ever seen. If we don’t take action, our planet will change far faster than we can adapt. This is the mother of all environmental problems and the Clean Air Task Force is on it.

I can’t find the CATF report on the web, but its results were reported by, among others, the MIT (Massachusetts Institute of Technology) Technology Review:

Fluctuating solar and wind power require lots of energy storage, and lithium-ion batteries seem like the obvious choice—but they are far too expensive to play a major role.

Building the level of renewable generation and storage necessary to reach the state’s goals would drive up costs exponentially, from $49 per megawatt-hour of generation at 50 percent to $1,612 at 100 percent. And that’s assuming lithium-ion batteries will cost roughly a third what they do now.

In summary, wind and solar may indeed undercut coal and nuclear on price when the costs of intermittency are ignored, and batteries may indeed be good for short-term grid stability applications. But please let’s not have anyone claim that solar + wind + batteries will usher in an era of cheap, clean, 100% renewable energy, because they won’t.