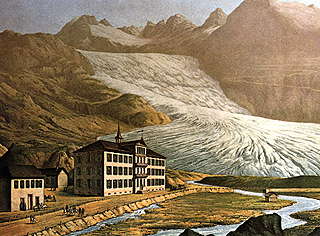 The Little Ice Age (LIA) was a recent and significant climate perturbation that may still be affecting the Earth’s climate, but nobody knows what caused it. In this post I look into the question of why it ended when it did, concentrating on the European Alps, without greatly advancing the state of knowledge. I find that the LIA didn’t end because of increasing temperatures, decreasing precipitation or fewer volcanic eruptions. One possible contributor is a trend reversal in the Atlantic Multidecadal Oscillation; another is an increase in solar radiation, but in neither case is the evidence compelling. There is evidence to suggest that the ongoing phase of glacier retreat and sea level rise is largely a result of a “natural recovery” from the LIA, but no causative mechanism for this has been identified either.

The Little Ice Age (LIA) was a period of lower global temperatures defined by temperature reconstructions based mostly on tree ring proxies. Figure 1 shows the results of fifteen such reconstructions for the Northern Hemisphere with three instrumental records added after 1900 (data from NOAA/NCDC). The period of lower temperatures between about 1450 and 1900 roughly defines the LIA, but the high level of scatter (cunningly muted by plotting the more erratic reconstructions in lighter shades) makes it impossible to pick exact start and stop dates:

Because of the problems with temperature reconstructions this post concentrates on the European Alps, where long-term instrumental records – some going back to the early 1700s – provide information on temperature and precipitation changes around the time the LIA came to an end. Another reason for concentrating on the Alps is that almost half of the world’s glaciers that have long-term monitoring data are located there.

Figure 2 is a plot of glacier lengths in the Alps since 1700, taken from Oerlemans et al. (2007) and based on historical data from 96 glaciers, a few of which are in the Pyrenees. According to this plot Alpine glaciers began to retreat at some time between 1800 and 1820, with the rate of retreat gradually increasing until about 1860 and becoming more or less constant after that. I have defined the beginning of the retreat as the end of the LIA in the Alps because there is no objective way of selecting a later date: 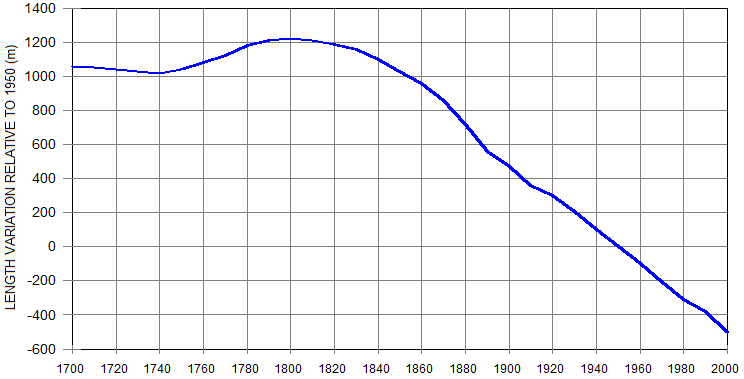 To evaluate how this plot matches up with European temperatures I downloaded 21 GHCN v2 long-term European temperature records from KNMI Climate Explorer. I was concerned that these records would show too much scatter to be of use, but after discarding three bad ones (St. Petersburg, Wroclaw and Paris) the remaining 18 (Archangel, Vilnius, Trondheim, Stockholm, Warsaw, Bergen, Budapest, Vienna, Copenhagen, Klagenfurt, Kremsmuenster, Berlin Tempel, Berlin Dahlem, Munich, Hohenpeissen, Basel, Greenwich, de Bilt and St. Bernard) match up reasonably well. Figure 3 plots all 18 records. The orange line is a smoothed mean:

According to the orange line Europe didn’t begin to warm until around 1890, long after the Alpine glaciers began to retreat. And serious warming didn’t begin until 1980.

Other data sets give similar results. According to the Central England temperature record the UK didn’t begin to warm until around 1900: 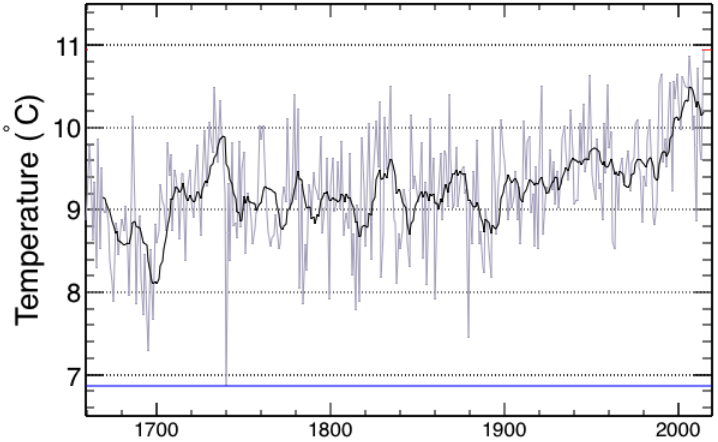 And according to the Hadley Centre’s CRUTEM4 gridded land temperature data set warming in the Alps didn’t begin until around 1890:

Evidently the end of the LIA in the Alps wasn’t triggered by rising temperatures. What other possibilities are there? Well, the other key ingredient in making ice is water, so I downloaded ten European precipitation records with data extending back before 1800  (Milan, Paris, Padua, Marseilles, Montdidier, Hoofdorp, Kew, Podehole, Lund and Uppsala), plotted them up and obtained the results shown in Figure 3:

And found that average precipitation in Europe hasn’t changed significantly in almost 300 years. This is in itself an interesting result, but a discussion of the implications is beyond the scope of this post. Suffice it to say that decreased precipitation did not cause the LIA to end either.

Figure 6: Alpine glacier length change (blue) vs. volcanic eruptions of VEI 5 or greater (red, data from Bradley 1992). Note that the VEI index is logarithmic, so a magnitude 6 will be ten times more explosive than a magnitude 5

The fact that the Alpine glaciers began to retreat began somewhere around the time of the 1815 Tambora eruption – the largest in recorded history – is intriguing, but it’s hard to think of a mechanism whereby Tambora could have initiated a glacial retreat in the Alps. It seems that in this case the coincidence really is coincidental.

What next? About ten years ago I put together the following graph. It showed a correlation between Alpine glacier retreat and the Atlantic Multidecadal Oscillation Index, which is calculated from North Atlantic sea surface temperatures: 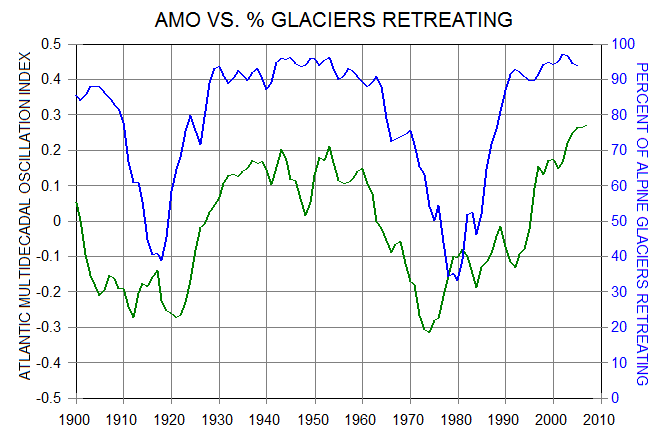 According to the AMO reconstruction presented in a post by Bob Tisdale (Figure 8) the beginning of Alpine glacier retreat coincides broadly with a change in the trend of the AMO Index from down to up around 1820. Since higher AMO values coincide with glacier retreats (Figure 7) it’s possible that this event may have contributed to or even triggered the Alpine retreat, but the data are too erratic to be confident that it did: 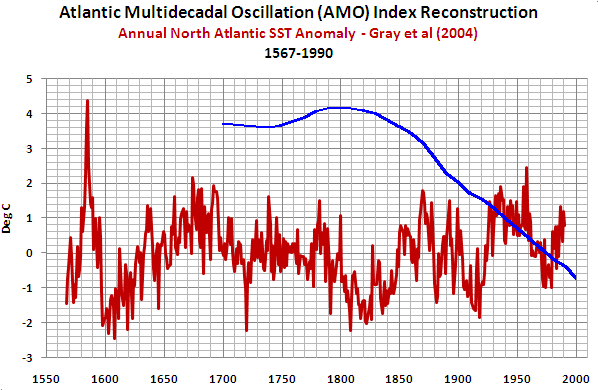 Next I looked at solar. Here I adopted a global perspective because solar variations would presumably impact glaciers all over the world, not just in the Alps. As shown in Figure 9, however, when the data from all the world’s glaciers are summed global glacier retreat mirrors Alpine glacier retreat, beginning in the early 1800s and picking up steam as the century progressed (graphic from Oerlemans et al. 2005): 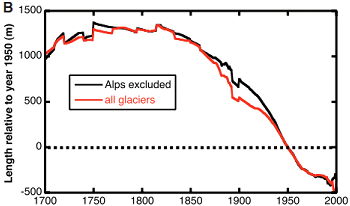 Figure 10 now shows two versions of sunspot counts, which are a measure of solar activity. The first is the “original” Hoyt & Schatten (1998) version, which for a number of years was used as the basis for estimating total solar irradiance. According to this version the end of the LIA coincided with the recovery from the Dalton solar minimum around 1820 and  since then the sunspot count has been increasing, albeit erratically. This suggests that a strengthening sun may well have contributed to ending the LIA. The second version is a revised version published by the Sunspot Index and Long-term Solar Observations group in 2015. It also shows the LIA ending during the recovery from the Dalton Minimum but no significant increase in the sunspot count since then. If this version is correct it’s difficult to see how the sun could have been responsible for ending the LIA: 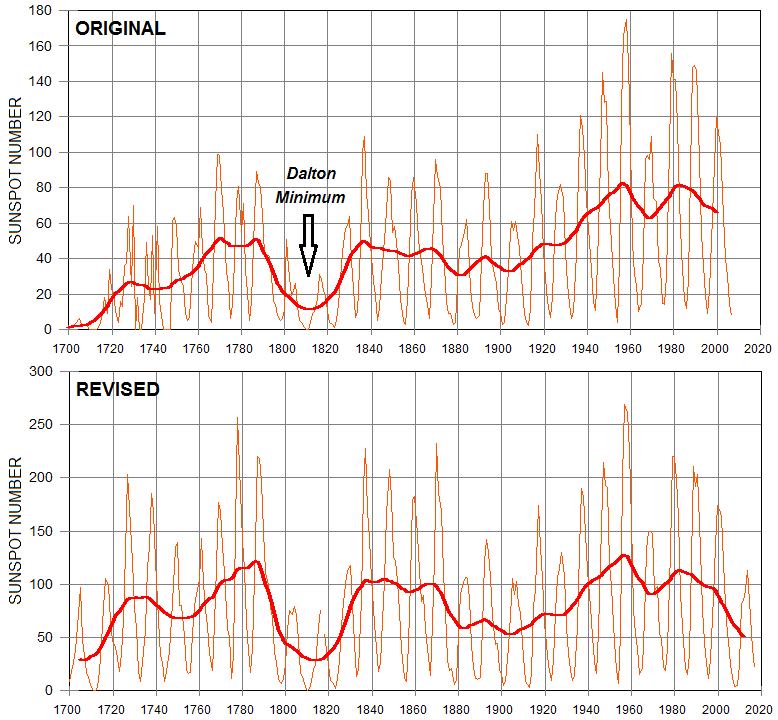 Counting sunspots, however, is more a black art than a science. (Try the quiz at the end of the post.)

Finally I looked at CO2. And at last I found something resembling a match. The Figure 11 plot from Quora broadly mirrors the main features of the glacial retreat plots shown in Figure 9, suggesting that increasing atmospheric CO2 levels were the culprit:

But not to worry. Not even Skeptical Science claims that CO2 caused the LIA:

The Little Ice Age remains for the present the subject of speculation. The most likely influence during this period is variable output from the sun combined with pronounced volcanic activity.

The cause of this relatively short lived cooling (it was not a true “ice age”) is likely due to an increase in volcanic eruptions and with some role for a slightly reduced solar activity.

And what does the IPCC have to say about it?

Both model simulations and results from detection and attribution studies suggest that a small drop in GHG concentrations may have contributed to the cool conditions during the 16th and 17th centuries. Note, however, that centennial variations of GHG during the late Holocene are very small relative to their increases since pre-industrial times. The role of solar forcing is less clear ….

AGW skeptics often claim that present-day sea level rise and glacier ice loss are a result of a natural recovery from the LIA. AGW believers counter that a “recovery from the LIA” is not an acceptable explanation; a causative mechanism must be identified. But they too are unable to come up with a mechanism which explains why sea levels have been rising and glaciers retreating for a well over a hundred years, long before man-made CO2 emissions became significant. Global warming certainly doesn’t explain it. Figure 12, which matches up Church and White’s global sea level reconstruction – the one used by the IPCC – against the HadCRUT4 global temperature record, shows sea levels rising since 1870, and at a constant rate between 1925 and 2000, regardless of what temperatures did. Sea levels don’t respond immediately to changes in temperature, but the fact that sea level rise was unaffected by global temperature fluctuations again suggests that a factor other than temperature was the dominant cause:

And what might this factor have been? A natural recovery from the LIA, of course.

There’s still a lot we don’t understand about how the Earth’s climate works.

How many sunspots are there in this photo? Make your estimate and stay tuned for the “correct” count. 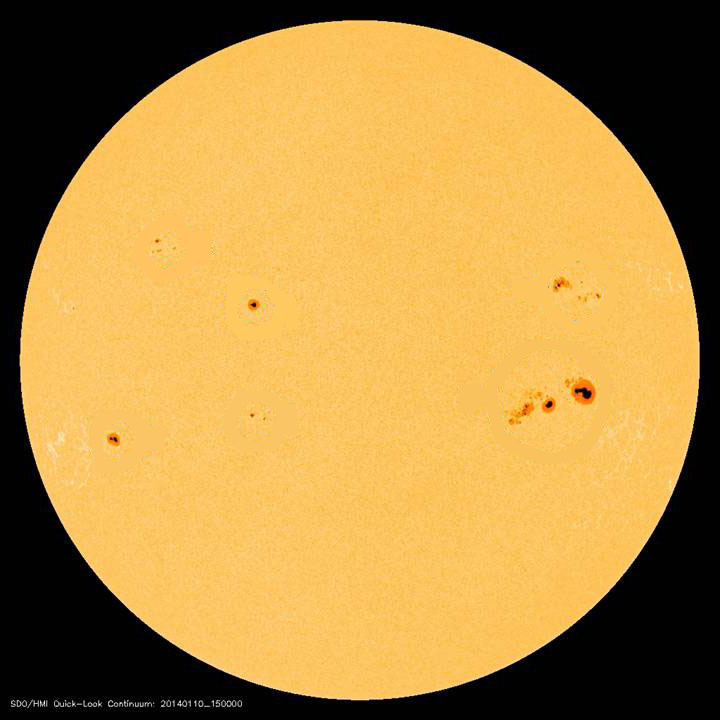