From the “alarmists and their cats are grumpy over this” department.

There’s been some recent hubbub over decreasing snowfall in the northern hemisphere by the usual suspects, who claim that AGW is reducing snow cover.

And then of course, there’s Dr. David Viner of CRU, who famously said in a story in the UK Independent titled: Snowfalls are now just a thing of the past:

However, the warming is so far manifesting itself more in winters which are less cold than in much hotter summers. According to Dr David Viner, a senior research scientist at the climatic research unit (CRU) of the University of East Anglia,within a few years winter snowfall will become “a very rare and exciting event”.

That’s opinion, then there’s data, such as this data from the highly respected Rutgers Snow Lab, as plotted by climate scientists Ole Humlum.

Don’t believe it? Plot it yourself: use this link to download the original data.

Hmmm … I took you up on your invitation to plot it myself. Actually, there is a trend … in fact, there are two trends.

As you can see, there’s a slight negative trend overall, about a tenth of a million square km. per decade. However, an examination of the blue Gaussian average in the bottom panel shows a faster drop to 1990, then a slow rise to the present. So I took a closer look at the post 1990 data.

As you can see, since 1990 the snow area has been increasing at about a quarter million square km per decade.

Steve Mosher writes in comments: (and I reply)

You cant say there is NO trend or zero trend. FFS 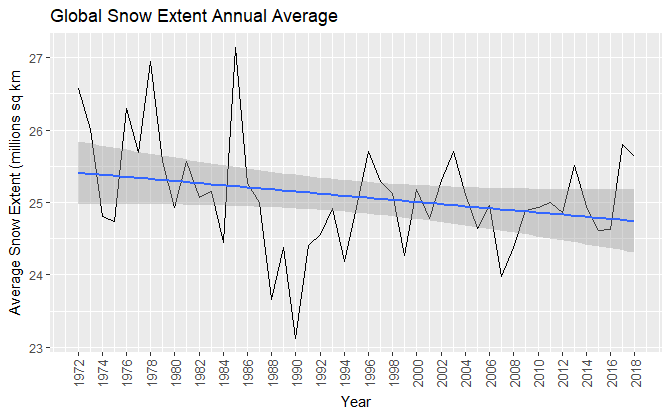 [UPDATE] I thought I might add one more plot. Here are the trends of the Rutgers snow data by quarter.

As you can see, there is no significant trend in the winter data. Snow in the fall has increased, snow in the spring and summer have decreased.