Zeke Hausfather who works for Carbon Brief and Berkeley Earth has produced a plot which shows almost perfect agreement between CMIP5 model projections and global temperature data. This is based on RCP4.5 models and a baseline of 1981-2010. First here is his original plot.

I have reproduced his plot and  essentially agree that it is correct. However, I also found some interesting quirks. Firstly here is my version of his plot where I have added the CMIP5 mean to compare with the new blended TOS/TAS mean. I have also included the latest HadCRUT4.6 annual values in purple. 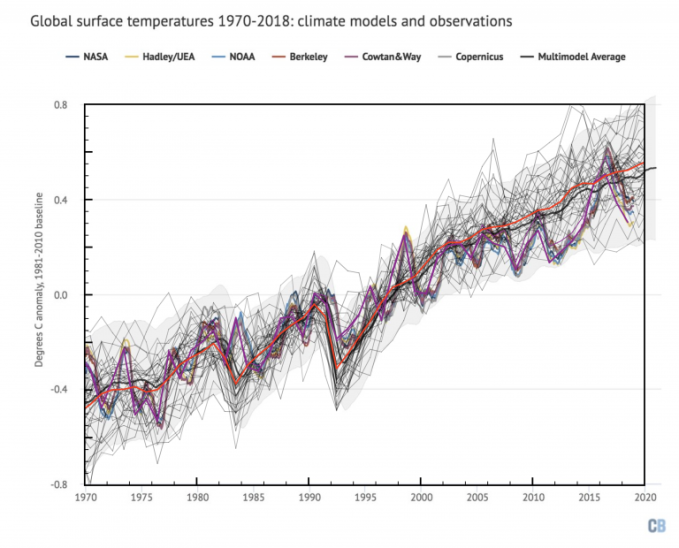 The apples to apples comparison (model SSTs blended with model land 2m temperatures)  reduces the model mean by about 0.06C. Zeke has also smoothed out the temperature data by using a 12 month running average. This has the effect of exaggerating peak values as compared to using the annual averages. To see this simply compare HadCrut4 (annual) in purple with his Hadley/UEA.

So now what happens if you change RCP?

Here is the result for RCP2.6 which has less forcing that RCP4.5

The model spread and the mean have increased slightly. So the model mean and grey shading should also  slightly rise.

Next, does the normalisation (baseline) affect the result ?

Yes it does. Shown above is the result for a normalisation from 1961-1990. Firstly look how the lowest 2 model projections now drop further down while the data seemingly now lies below both the blended (thick black) and the original CMIP average (thin black). HadCRUT4 2016 is now below the blended value.

This improved model agreement has nothing to do with the data itself but instead is due to a reduction in warming predicted by the models. So what exactly is meant by ‘blending’?

The detailed blending calculations were done by Kevin Cowtan using a land mask and ice mask to define where TOS and SAT should be used in forming the global average. I downloaded his python scripts and checked all the algorithm, and they look good to me. His results are based on the RCP8.5 ensemble. These are the results I get using his Python code. 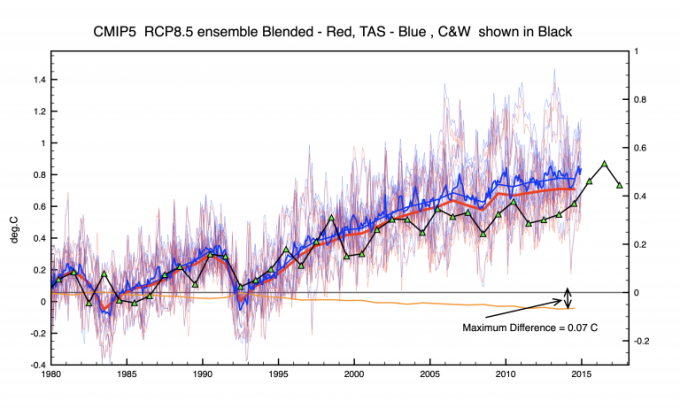 Agreement has definitely now improved between the data (Cowtan a& Way) and the models, but they are still running warmer from 1998 to 2014.

Again the models mostly lie above the data after 1999.

This post is intended to demonstrate just how careful you must be when interpreting plots that seemingly demonstrate either full agreement of climate models with data, or else total disagreement.

In summary, Zeke Hausfather writing for Carbon Brief 1) used a clever choice of baseline, 2) of RCP for blended models and 3) by using a 12 month running average, was able to show an almost perfect agreement between data and models. His plot is 100% correct.  However exactly the same data plotted with a different baseline and using annual values (exactly like those in the models), instead of 12 monthly running averages shows instead that the models are still lying consistently above the data. I know which one I think best represents reality.