Skip to content
From NASA Ames:
BLUF: “Once people realize there’s a problem, they tend to fix it…In the 70s and 80s in India and China, the situation around vegetation loss wasn’t good; in the 90s, people realized it; and today things have improved. Humans are incredibly resilient. That’s what we see in the satellite data.” –Rama Nemani, NASA’s Ames Research Center 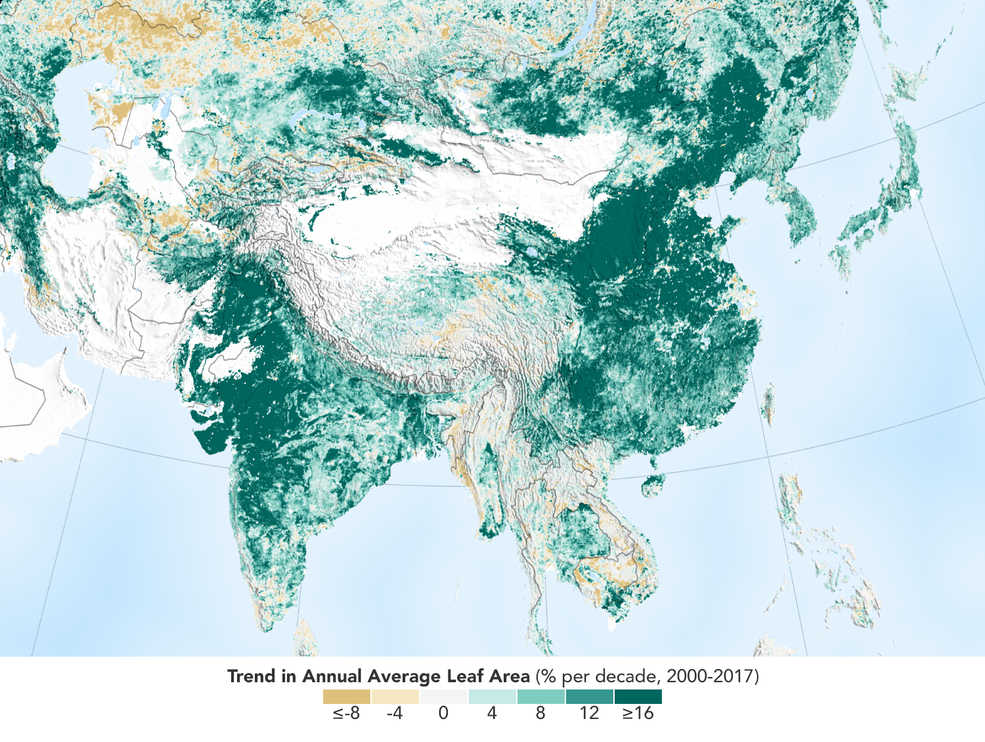 Over the last two decades, the Earth has seen an increase in foliage around the planet, measured in average leaf area per year on plants and trees. Data from NASA satellites shows that China and India are leading the increase in greening on land. The effect stems mainly from ambitious tree planting programs in China and intensive agriculture in both countries.
Credits: NASA Earth Observatory

The world is literally a greener place than it was 20 years ago, and data from NASA satellites has revealed a counterintuitive source for much of this new foliage: China and India. A new study shows that the two emerging countries with the world’s biggest populations are leading the increase in greening on land. The effect stems mainly from ambitious tree planting programs in China and intensive agriculture in both countries.

The greening phenomenon was first detected using satellite data in the mid-1990s by Ranga Myneni of Boston University and colleagues, but they did not know whether human activity was one of its chief, direct causes. This new insight was made possible by a nearly 20-year-long data record from a NASA instrument orbiting the Earth on two satellites. It’s called the Moderate Resolution Imaging Spectroradiometer, or MODIS, and its high-resolution data provides very accurate information, helping researchers work out details of what’s happening with Earth’s vegetation, down to the level of 500 meters, or about 1,600 feet, on the ground. 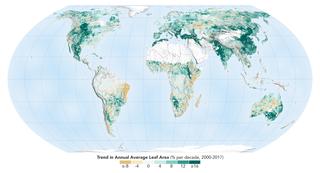 The world is a greener place than it was 20 years ago, as shown on this map, where areas with the greatest increase in foliage are indicated in dark green. Data from a NASA instrument orbiting Earth aboard two satellites show that human activity in China and India dominate this greening of the planet.
Credits: NASA Earth Observatory

Taken all together, the greening of the planet over the last two decades represents an increase in leaf area on plants and trees equivalent to the area covered by all the Amazon rainforests. There are now more than two million square miles of extra green leaf area per year, compared to the early 2000s – a 5% increase.

“China and India account for one-third of the greening, but contain only 9% of the planet’s land area covered in vegetation – a surprising finding, considering the general notion of land degradation in populous countries from overexploitation,” said Chi Chen of the Department of Earth and Environment at Boston University, in Massachusetts, and lead author of the study.

An advantage of the MODIS satellite sensor is the intensive coverage it provides, both in space and time: MODIS has captured as many as four shots of every place on Earth, every day for the last 20 years.

“This long-term data lets us dig deeper,” said Rama Nemani, a research scientist at NASA’s Ames Research Center, in California’s Silicon Valley, and a co-author of the new work. “When the greening of the Earth was first observed, we thought it was due to a warmer, wetter climate and fertilization from the added carbon dioxide in the atmosphere, leading to more leaf growth in northern forests, for instance. Now, with the MODIS data that lets us understand the phenomenon at really small scales, we see that humans are also contributing.”

China’s outsized contribution to the global greening trend comes in large part (42%) from programs to conserve and expand forests. These were developed in an effort to reduce the effects of soil erosion, air pollution and climate change. Another 32% there – and 82% of the greening seen in India – comes from intensive cultivation of food crops.

Land area used to grow crops is comparable in China and India – more than 770,000 square miles – and has not changed much since the early 2000s. Yet these regions have greatly increased both their annual total green leaf area and their food production. This was achieved through multiple cropping practices, where a field is replanted to produce another harvest several times a year. Production of grains, vegetables, fruits and more have increased by about 35-40% since 2000 to feed their large populations.

How the greening trend may change in the future depends on numerous factors, both on a global scale and the local human level. For example, increased food production in India is facilitated by groundwater irrigation. If the groundwater is depleted, this trend may change.

“But, now that we know direct human influence is a key driver of the greening Earth, we need to factor this into our climate models,” Nemani said. “This will help scientists make better predictions about the behavior of different Earth systems, which will help countries make better decisions about how and when to take action.”

The researchers point out that the gain in greenness seen around the world and dominated by India and China does not offset the damage from loss of natural vegetation in tropical regions, such as Brazil and Indonesia. The consequences for sustainability and biodiversity in those ecosystems remain.

Overall, Nemani sees a positive message in the new findings. “Once people realize there’s a problem, they tend to fix it,” he said. “In the 70s and 80s in India and China, the situation around vegetation loss wasn’t good; in the 90s, people realized it; and today things have improved. Humans are incredibly resilient. That’s what we see in the satellite data.”

This research was published online, Feb. 11, 2019, in the journal Nature Sustainability. 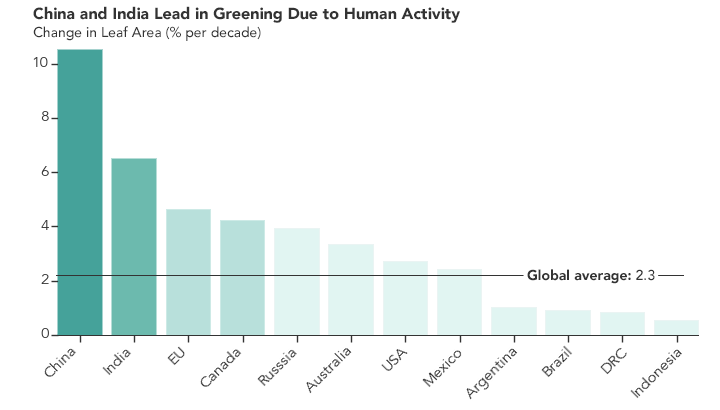 Members of the news media interested in covering this topic should get in touch with the science representative on the NASA Ames media contacts page.