From the Illinois State Climatologist:

Champaign, Ill., 3/6/19: An Arctic outbreak in late January 2019 led to widespread bitterly cold temperatures across much of the Upper Midwest, including Illinois. On the morning of Jan. 31, the cooperative weather observer at Mt. Carroll, located in Carroll County, reported a temperature of -38 degrees.

After a comprehensive review, the State Climate Extremes Committee (SCEC) unanimously voted to validate the -38 degrees reading as the new official state record minimum temperature. This committee ensures that the observation is meteorologically plausible, is within a range that the reporting instrument can detect, and that the instrument is in proper working order.

The previous minimum temperature record for Illinois was -36 degrees set in Congerville, located in Woodford County, on Jan. 5, 1999. The coldest temperature prior to the Congerville record, -35 degrees, was also set at Mt. Carroll in January 1930, and was later tied with Elizabeth in February 1996.

The Mt. Carroll station is a traditional daily observing station located in northwestern Illinois. It has been in service, with minor interruptions, since 1895, and has been observing temperatures since 1897. It is operated by the City of Mt. Carroll and attended by staff at the city’s water treatment plant.

You can view the final report on the NCEI website here: https://www.ncdc.noaa.gov/extremes/scec/reports

A complete list of current state records can be found here:
https://www.ncdc.noaa.gov/extremes/scec/records/IL

[HiFast note:  This station is at about 740′ elevation in a creek bed draw at the town’s sewage treatment plant (coords: 42.0981 -89.9842).  The Stevenson screen is next to a prepared (concrete?) path and appears to be less than 20 feet from structures including a settling/aeration basin.  Not optimally sited.] 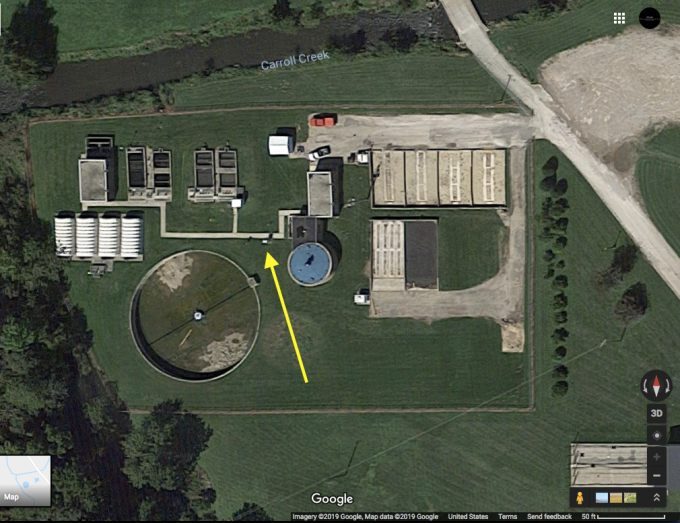