In prior postings I did a sample of various countries around the world, and a full set of South America and Antarctica. This extends that set with North America.

I’m goiing to group things into North Continental (USA, Canada, Greenland), Central (Mexico and Central American countries) and Carib, those islands in the Caribbean Sea. Why? Because countries in those areas ought to look a lot more like each other in terms of Anomaly than like those in other groups. The Caribbean is dominated by water and tropical conditions. Central America and Mexico are about the same but with a bit less water influence. The USA, Canada and to some extent Greenland are large land masses prone to cold winters and significantly further north (so more summer / winter sun changes). This also lets me group making the graphs into smaller work units and it is less oppressive 😉

Here’s the Koppen Climate graph for North America so you have something for comparison.

So about 1 C range of changes both ways. So an error band of about 1 C? Is that what this means? So we can’t know if there is 1/2 C of warming… The the actual anomalies below bounce around by a 3 C range (that might have a flier off the graph – I didn’t check). Looks to me like Greenland data is just chaotic weather. I do note that the really big DIP happens right on the “baseline period” used by GISStemp (1950-1980) or Hadley (1960-1990)…

Interesting that it’s a roll off to colder. The anomalies (below) look a mess, but without evident warming. More like the loss of some very low going extremes recently. (One wonders if the big freeze in the last couple of years will show up in future data?)

Again with recent data cooled. Wonder if they were embarrassed by all the attention over the last few years. We also again see no real warming tops, only loss of cold excursions and a general narrowing of the range. Or perhaps being early to the party, they had already “cooked” the v2 data so no more needed here. /snark;

These are all in one large shallow water basin with common weather. They ought to be nearly identical.

So all we get is the v4 anomaly graph: 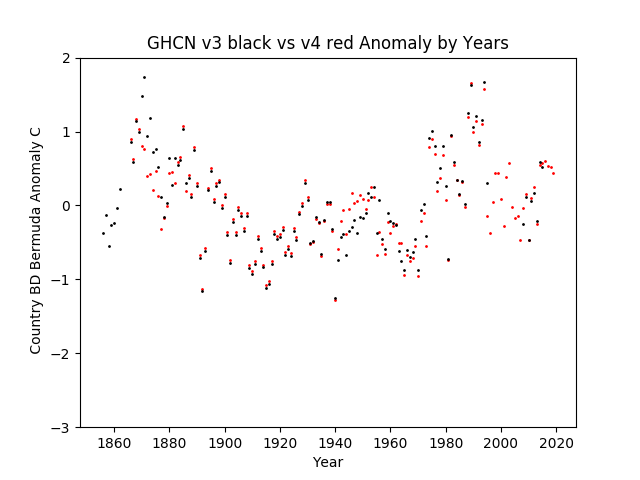 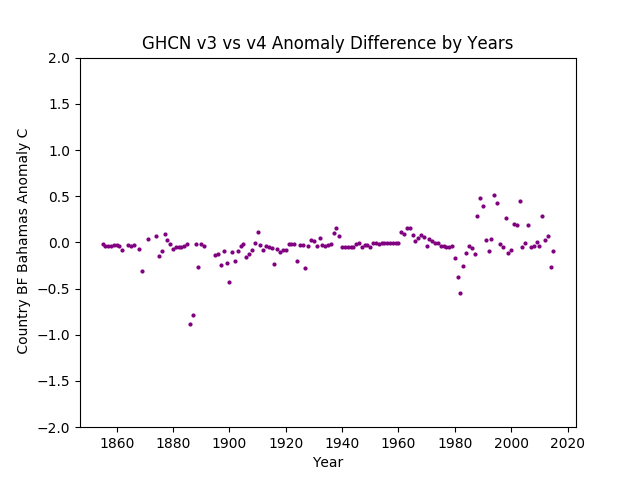 Drop the past about 0.4 C and warm the recent about 1/4 C – Presto! a trend! Except that those pesky 1800s look about the same as now. Better use that cold snap from 1940 to 1980 as the “baseline period” and ony measure warming against it.

Again with cooling the past a bit. But from 1990 to date is basically flat. Ought not the “warming from CO2” be more now and less in 1970?

Dominica has no data in v3.3, so all we get is the v4 anomaly graph. 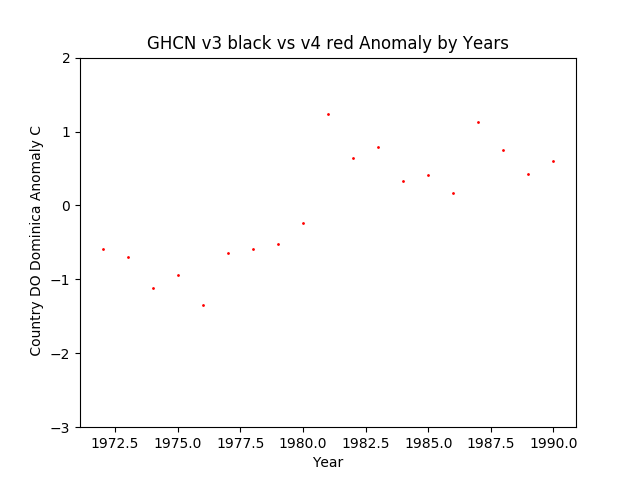 So they had a crazy high 2 C “warming” rate, chop 1 C out of it and get a more respectable 1 C rate. Or is there just 1.5 C of “random” in temperature measuring on islands?

Again with 2 C of warming, so chop a degree C out of some of it, yet the most recent data points (see below graph) are below normal. But that’s just weather, right?

A whopping 5 C range of temperatures, but currently about the same as 1940. Natural variability or error band, one of the other, is way higher than that 1/2 C of Project Fear Warming. 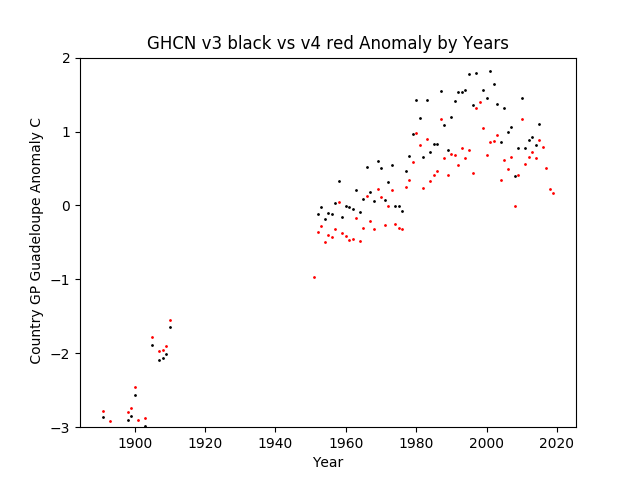 Looks like nobody fooled with the temperatures between versions. Guess a major hurricane will stop that kind of thing for a while. Anomaly graph below is rather flat too. Had a rise in to 1960, then was ignored for about 20 years, and now the temperatures are like “1940 all over again”.

Push up the 40s (outside the baseline interval) a 1/2 C and drop the baseline spots about 1/2 C but with some noise in it, then lift the very recent by about 1/2 C. I think we’ve seen that before.

Per the anomaly graph below, Jamaica has warmed about 3 C. All that without setting regular record temperatures and with nearby islands not having the same rise. Airport tarmac anyone? Didn’t Jamaica have a big pop in tourism with the whole Bob Marley / Reggae thing? I know I went. Locals were complaining about added traffic, all the airplanes and hotels… I note in passing the hot late 1800s highs are about the same as now. 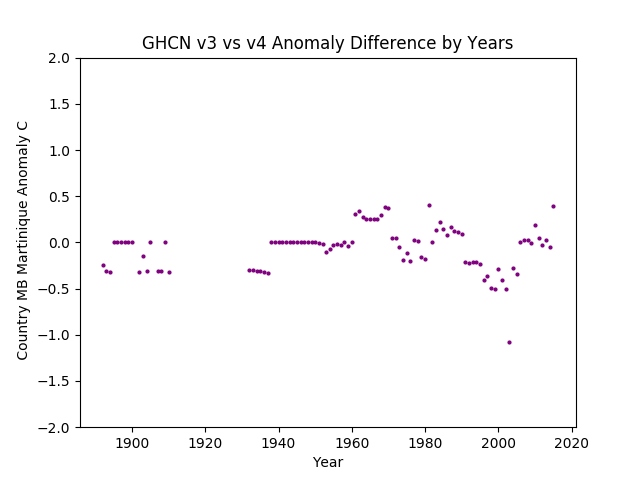 Differences look like about 1 C range of random. Anomaly trend looks like it was cold in the ’60s and recovered. 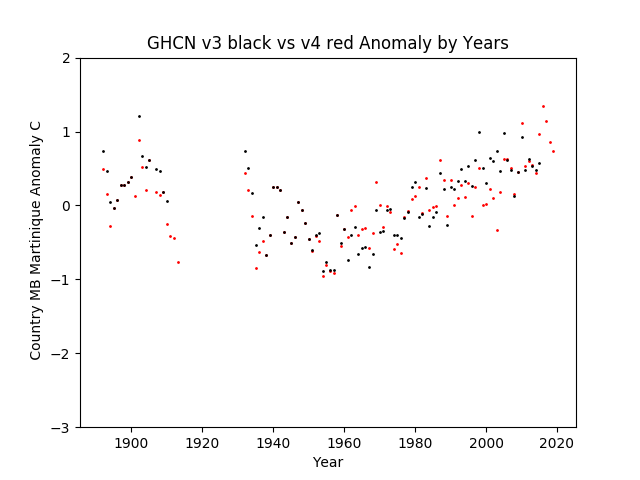 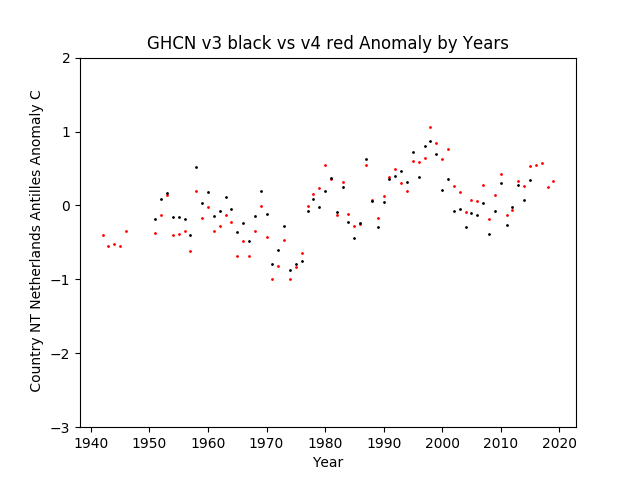 Well that’s interesting. In v3.3 it was heating up by 1 C in Puerto Rico, so now the change is a 1 C cooling, and Puerto Rico is showing mostly flat trend in the red anomaly spots below. Almost like a decade of scrutiny and being pulled before congress might have caused some folks to fear being caught…

Nothing goning on in St. Ktis & Nevis. Oddly, as all these islands are in the bathtub together, their anomaly graphs ought to all look alike. Yet they don’t…

Saint Lucia has no data in either version, so no graphs at all:

Kinda makes you wonder why it is in the inventory at all. 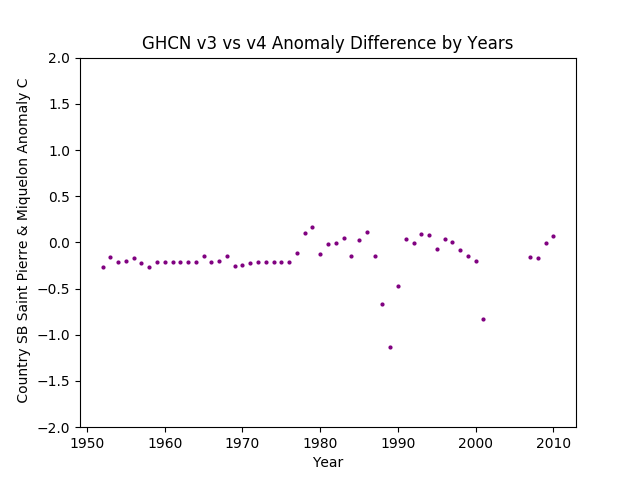 Nice gentle almost unnoticed 1/4 C cooling of the past, a narrow “dip” in the baseline interval. All in all, nicely done sculpting.

Saint Vincent & The Grenadines have no data in version v3.3.

So all we get is this v4 anomaly graph: 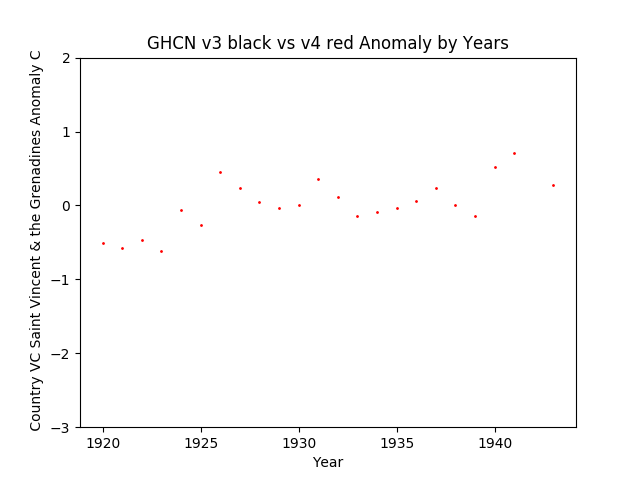 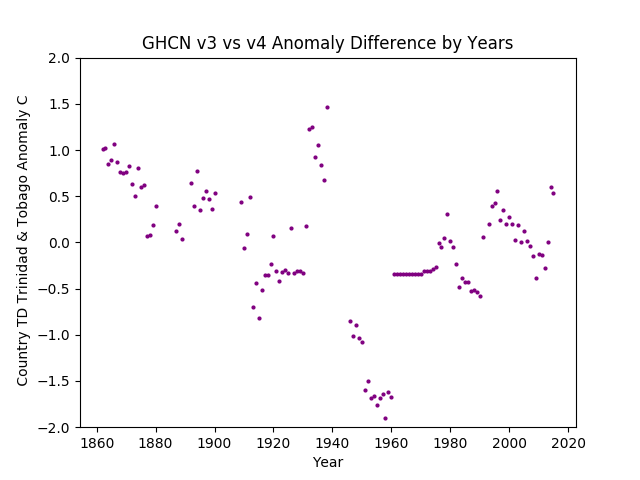 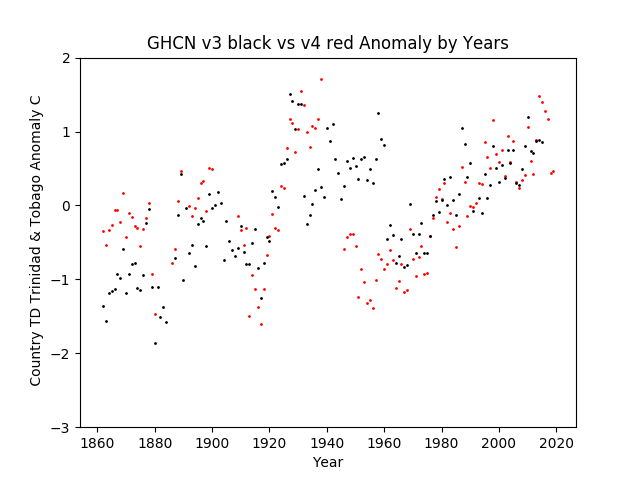 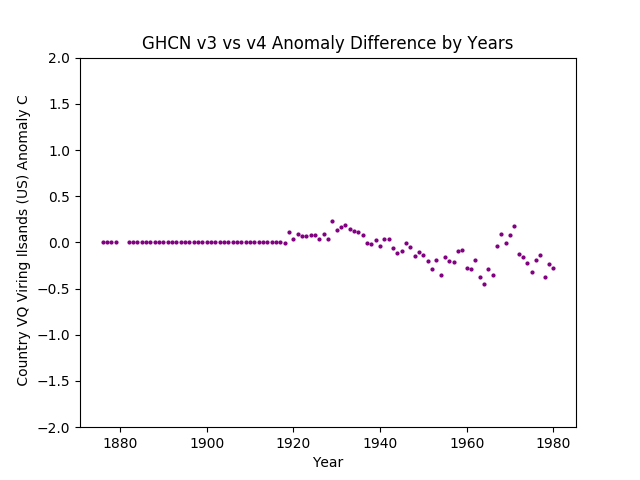 Sure doesn’t look like warming to me. Given some islands flat, and some with 3 C of warming, I think we’re looking at land use issues, thermometer location, or error bands / data fudging. 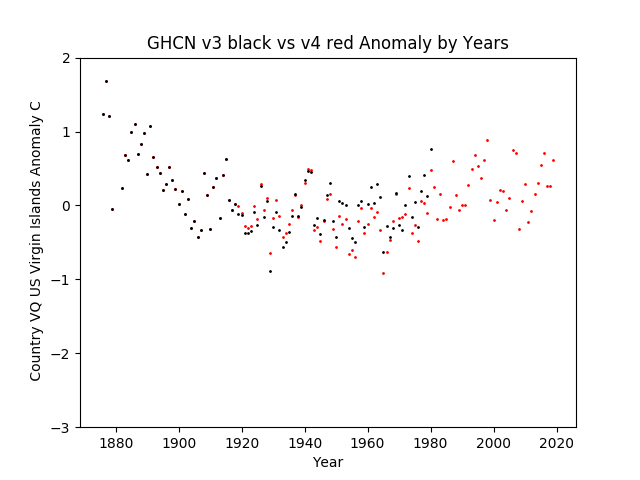 Gee, that recent rise at the tail of the anomaly data (below) seems to match in shape the rise in the difference graph (above). 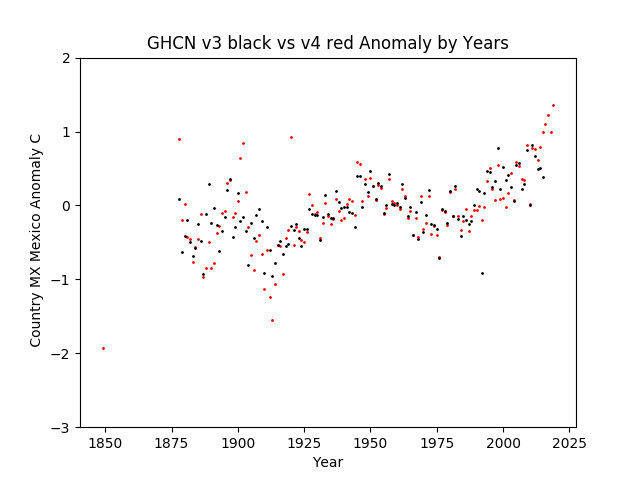 The actual anomaly data (below) isn’t warming on the top end, though we do see the loss of low going anomalies in the recent data. As though tons of concrete at the airport held heat over night… The change graph isn’t doing much either, though around 1980 got a spike. Sleepy little Belize…

Not really warming though we lose some of the low going anomalies in recent data (see graph below) and the changes between v3.3 and v4 are not much. Looks like nobody is paying attention to Guatemala.

Looking at the anomaly plot below, there’s a nice “dip” in the baseline interval, and a gap about 1990-2005, but then some crazy changes in the above difference graph. Looks to me like +/- 1 C of error band and nobody really knowing just what the temperature is in tenths of C.

Already has a nice “dip” in the baseline interval, but those changes in the recent time are just wild. 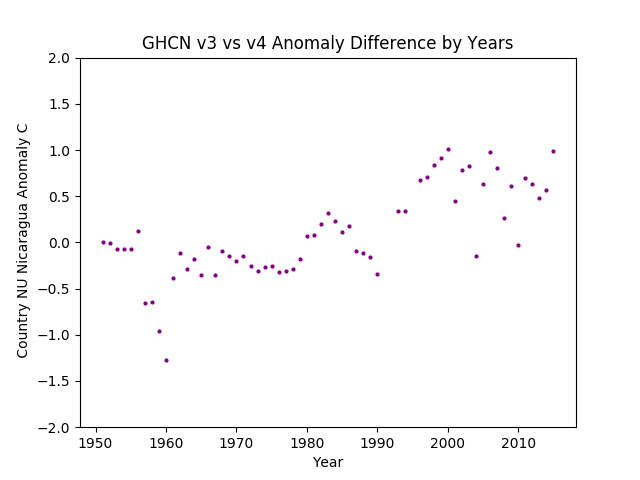 We have 1/2 C drop added to the baseline, and 1 C of rise added in recent data. Just about the same as the “warming” found. Looks like someone found a way to get Nicaragua data in line with goals. 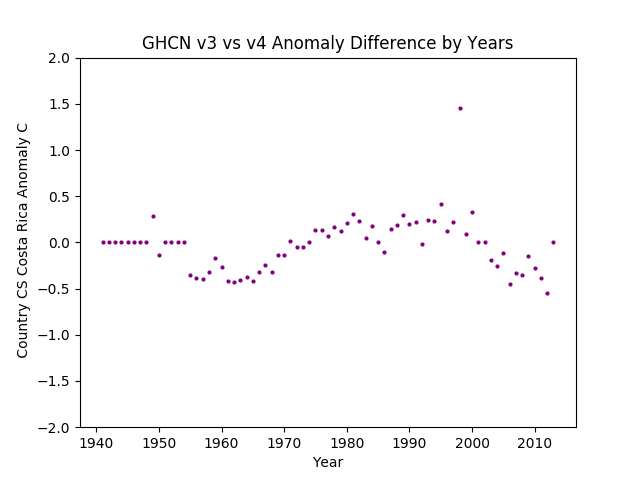 Nice dip in the baseline interval, but what’s this with the cooing at the end? Costa Rica just not getting hot? And right next to Nicaragua too. Ought to be nearly identical, but isn’t. 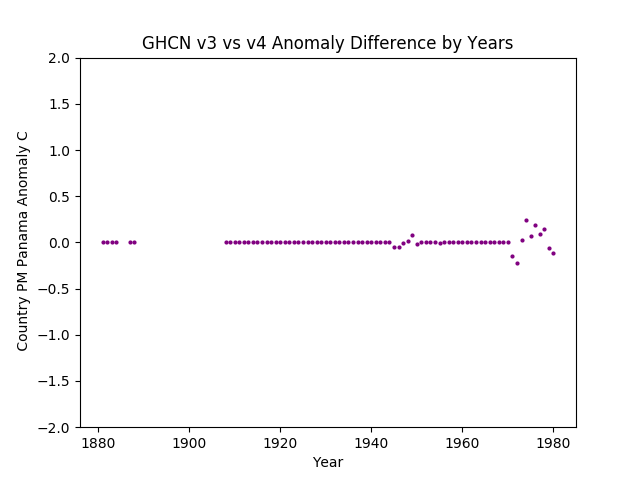 Gee.. Looks to me like Panama is being flat to slightly cooling (see below) and not much change at all between v3.3 and v4. I wonder if this is at a US Military Base and they are grumpy if you play with their data? I wonder if that’s why it cuts off in 1980… Seems to me someone ought to know the temperature in Panama right now.

The specifics on the report / graph making programs is in the first “by country” posting so will not be repeated here.

This SQL produced the list of countries in North America (Region 4):

So there you have it. A few days of “seat time” at the computer. Hopefully it is of use to someone. I think it does point out what country’s data needs more scrutiny. Then there’s also the question of why trends in some nations are different from another very nearby and in the same body of water. Furthermore, there’s a great “cross check” for this in that there is surface water temperature data from decades of hurricane tracking. On these small islands, air temperature never strays far from water temperature. I was swimming in Jamaica once when rain started. The ocean, air, and rain all at 86 F.

It does look like there was a cyclical “dip” after the hot 1930s-40s into a cool ’50s-70s and we have newspaper and magazine articles from then shouting about a New Little Ice Age (and I personally remember it – IT Happened.) So despite the folks saying that picking it for a “baseline” doesn’t matter, I think it’s just too convenient. The method I used to calculate anomaly has no baseline. A given thermometer is only compared to itself over a selected month across the years. (So, for example, the Jamaica Airport thermometer would have all of its Januaries averaged then the January anomaly computed against that. Repeat for each other month of the year for each instrument.) Then there is just the shortness of most records. Many just start in that cold period and rise out of it, not having an old 1870 hot sample to see in their past.

Finally, with that much change showing up in some very small countries, you know they didn’t have a dozen thermometers to choose from in 1890. It must be some kind of “intervention” when decades of data all move by the same amount. It just screams “Fudging the data” (though I’m sure they would call it fixing errors in the past). But when all the “warming” comes from the “fixing up” and “adjusting” (even of this “unadjusted” data) or from splicing a 1/2 cycle and calling it a trend: Just where is the room for CO2?

It took me a few days of “seat time” to make this set and post it, so don’t worry if you just want to look at a few each day over time. After the first dozen even my eyes started to glaze over 😉 But these will be here for months or years to come, for your pondering.