Starting in January 2019, unusual and at times record cold has been locked in over the north central states. 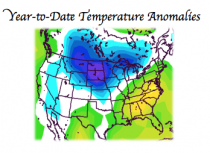 Though there was heat in late summer in the southeast and eastern Gulf to the Mid-Atlantic, the cold held in the north central. After a very cold spring with late snows, which significantly delayed or prevented grain planting, a cool summer followed and gave way to a very early cold shot in late September that brought early deep freezes and even record snows in the north central leading to significant crop losses.

The cold central deepened in October and pushed to the east bringing very early snow into the Midwest. October…