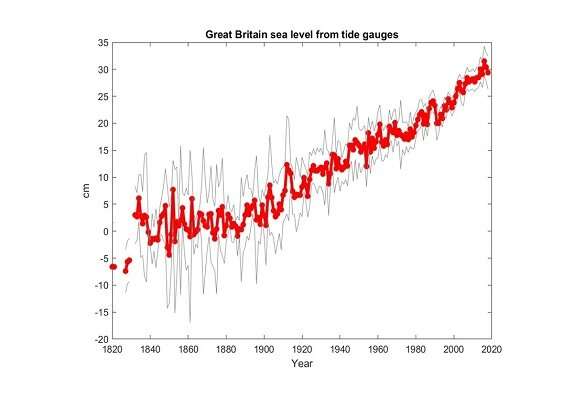 Credit: University of Liverpool / National Oceanography Centre (Liverpool branch)
The graph looks consistent with mild warming following the Little Ice Age. About 30 cms. or 1 foot of sea level rise in 130 years since 1890 is nothing remarkable. The average duration of solar cycles was longer in the 19th century than in the 20th but that trend is reversing now, with a lot more sunspot-free days per cycle. Climatic effects may follow.
– – –
A study published by University of Liverpool scientists, alongside colleagues from the Liverpool branch of the National Oceanography Centre, has uncovered and analyzed new sea level records from the nineteenth century which show that the increased rate of the rise of British sea level took place from 1890 onwards, says Phys.org.

Nowadays, sea level measurements around the British Isles are made by tide gauges which record digitally and transmit the data automatically.