This Post details the daily power consumption data for the AEMO coverage area in Australia. For the background information, refer to the Introductory Post at this link.

Each image is shown here at a smaller size to fit on the page alongside the data for that day. If you click on each image, it will open on a new page and at a larger size so you can better see the detail.

Note also the scale change for all of the images, and that even though they look similar in size of generation, that scale (the total power shown on the left hand vertical axis) has been changed to show the graph at a larger size to better fit the image for that graph.

Here, the total power generation from every power plant source is the…

Nukes to the rescue.

For most of the month of February the Northwest’s only nuclear power plant has been under a “no touch” order to help keep the heat on across the region.

The Bonneville Power Administration, which markets the electricity produced at the nuclear plant near Richland, asked for the restriction during an unusually cold February across the state that increased the demand for electricity.

The policy limits any maintenance activity that would either require a reduction in power or would pose a risk to sustaining 100 percent production, said Mike Paoli, spokesman for Energy Northwest.

“No touch” is occasionally requested by BPA when unusually hot or cold weather increases demand for electricity.

For instance, in August 2017 the nuclear power plant was under the policy for about a week.

There is a useful site for collecting data on the European power sector, called Energodock:

It gives a variety of data by country. I have used it to analyse generation data across Western Europe for last month. (I have ignored Eastern Europe at this stage). 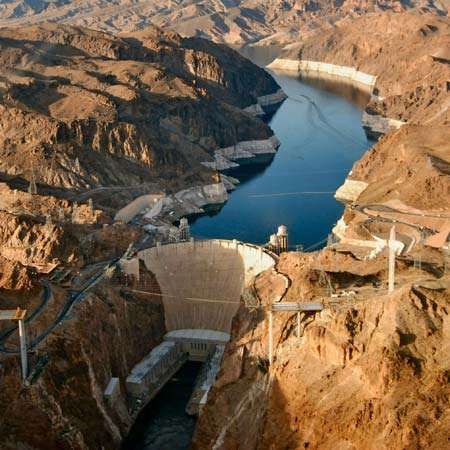 The Los Angeles Department of Water and Power (LADWP) plans to add a pumped hydro system to the existing Hoover dam hydro plant to help store California’s excess solar and wind generation and to increase the dam’s capacity factor, which is currently around 20%. As far as I know this would make the Hoover dam the world’s first hydro plant to combine both conventional and pumped hydro. No project details are presently available, but there is enough background information to scope out what the project might involve and whether it will justify its reported $3 billion price tag. The results show that numerous technical, legal, and environmental issues will have to be resolved before the project can go ahead, and if it does it will store only a small fraction of California’s growing intermittent renewable surpluses. It seems that the benefits will not justify the cost. (Inset, Hoover Dam, Lake Mead in background.)

Figure 1 shows the locations of the four dams on the Colorado River that generate hydroelectricity. The dams below the Parker dam that divert water for irrigation uses are not shown. 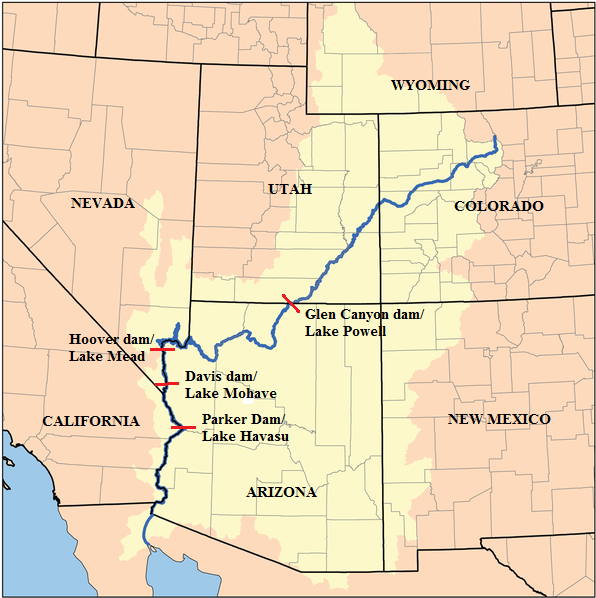 Figure 1: Location of hydro dams and reservoirs on the Colorado River. The drainage basin is shown in light yellow

Table 1 gives specifics. The data are from Wikipedia:

* According to the Bureau of Reclamation, which administers the Hoover Dam, average annual generation is 4.2 million MWh
** includes nearby 20MW Headgate Rock dam

A few points to note before proceeding. First, Colorado River hydro is a bit player in the context of regional electricity generation. According to EIA data the four states that have direct access to the hydro plants – Arizona, California, Nevada and Utah – have a combined installed capacity of 137,000 MW, and the 3,770 MW of Colorado River hydro capacity represents only 2.7% of this. Colorado hydro also contributed only 2.3% of 2016 generation in these states (8,866 of 383,647 GWh).

Second, Colorado River water rights were allocated in 1922 after a series of unusually wet years that indicated an average flow of 16.4 million acre-feet (20.2 million cu m)/year. Later estimates have shown that the true average flow rate is as low as 13.2 million acre-feet (16.3 million cu m)/year. As a result Colorado River water is oversubscribed. A precarious balance is maintained by the “Law of the River” compact, the outcome of years of squabbling and lawsuits between states and local jurisdictions, but the basic problem is that there just isn’t enough water in the Colorado to go round. This is reflected in the average 26.9% capacity factor shown in Table 2, which is significantly lower than normal for conventional hydro because of a shortage of water. (All of the water that comes down the Colorado gets used. Below the Palo Verde dam, which diverts water to Arizona about half-way between the Parker Dam and the border, the river becomes little more than a trickle, and by the time it gets to the Sea of Cortez it has pretty much dried up altogether.) 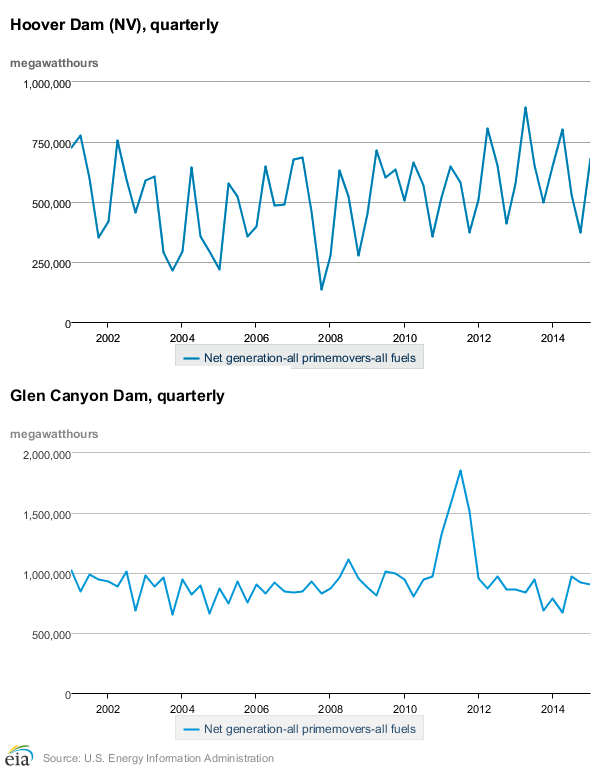 Figure 2: Quarterly generation from the Hoover and Glen Canyon dams

There is also no evidence for a major recent decline in reservoir capacity, as shown in Figure 3. There was a large decrease between 2000 and 2005, but since then there has been little overall change in combined stored water volumes:

However, neither reservoir has ever been more than 90% full and the average for both is around 65% full. Combined with the low capacity factors shown in Table 1, this suggests that the dams are overdesigned relative to water availability.

Now on to the LADWP Hoover Dam pumped hydro proposal. The available data are skimpy to say the least. From Utility Dive:

The Los Angeles Department of Water and Power (LADWP) is investigating a project that would use Hoover Dam as part of a $3 billion pumped hydro storage project. The plan calls for using solar and wind resources to pump water back up to Lake Mead, which is impounded by the Hoover Dam, where it would be stored until needed to generate power. The project would install a pumping station about 20 miles downstream from the existing dam to move water back up to the lake.

And that’s it. There may in fact be no more information available. LADWP has yet to publish a plan.

Taking the above points in reverse order, the first question is where the “pumping station about 20 miles downstream from the existing dam” will be. It can’t be in the river itself – pumping large volumes of water out of a not-very-large free-flowing river is not a viable proposition. It will have to be installed in the headwaters of the Lake Mohave reservoir at a location where the reservoir is wide and deep enough to support large pumping volumes. My best-guess location is shown in Figure 4. It’s slightly over 20 miles south of the Hoover dam as the vulture flies:

Figure 4: Google Earth view of the Colorado River between the Hoover and Davis dams. Note that the view looks west rather than north

So what LADWP is proposing to add is a conventional pumped hydro system, with Lake Mojave the lower reservoir and Lake Mead the upper, and to use the pumping plant to add water to Lake Mead during periods of electricity surplus so that a) conventional generation can be increased and b) the surplus does not go to waste. And since the purpose of the project is not to balance out large fluctuations in renewable generation – the limitations imposed by the 2GW capacity of the Hoover dam would preclude that anyway – there are no theoretical limitations on the capacity of the pumping plant. It can be made as big as LAWP wants. And the $3 billion price tag suggests that LADWP is indeed thinking big.

So how big should it be? It depends on how much surplus renewable energy there is, and there are innumerable scenarios that could be considered. To simplify matters I have chosen the “California Duck Curve”, which predicts a daytime solar surplus of around 8GW in 2020 (Figure 5), although this will understate the magnitude of the surplus if California succeeds in meeting its renewable energy targets.

To pump this solar surplus up to Lake Mead the pumping plant would take up to 10GW of capacity and would need to lift about 50GWh, by my calculations equivalent to about 100 million cu m of water, over a 12-hour period. This would lower the level of Lake Mohave by about a meter and raise the level of Lake Mead by about 0.25 of a meter. 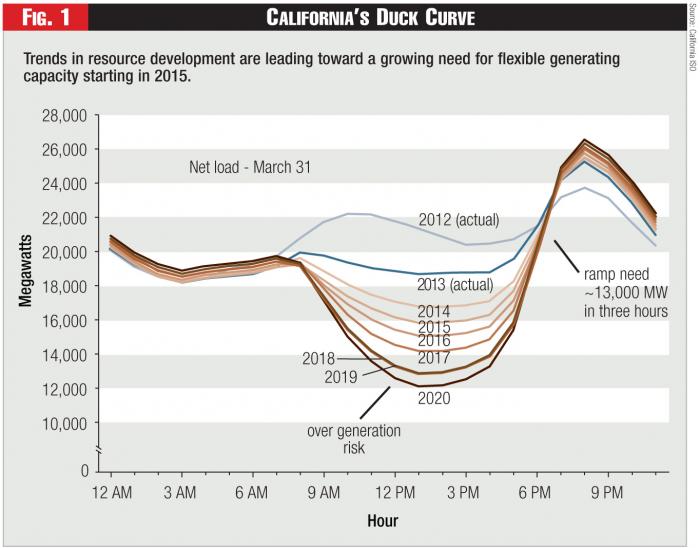 The problem, however, is releasing this water from Hoover dam. With discharge at the dam’s full 2GW capacity over the intervening 12 hours between the solar surpluses only about half of the water, i.e. 50 million cu m, would be released downstream. So each night 50 million cu m of water would flow down the Colorado, and on reaching the pumping station it would be pumped up again along with another 50 million cu m from Lake Mohave. The long term impacts would be a) Lake Mead might never get rid of all the water pumped into it (presently is has room for another 20 billion cu m, or about 400 days of pumping) and b) the lower Colorado would eventually run dry, along with the multi-billion-dollar agricultural and recreational industries it supports.

Releasing 50 million cu m of water over a 12-hour period might also cause some flooding downstream. River flow below the Hoover dam averages about 10,000 cu ft/sec, or 23 million cu m/day, as shown in Figure 6:

Figure 6: Flow rates below Hoover dam. Data from the University of Arizona

So while there is no theoretical limit on the capacity of the pumping plant, the need to balance inflows and outflows from Lake Mead poses a major real-life constraint. It may restrict pumping capacity to as little as 3 or 4 GW, whereupon the Hoover dam would be able to offset only a portion of the solar surplus. The situation would change if the capacity at the Hoover Dam were increased, but the Bureau of Reclamation, which operates the dam, has no plans to do this that I am aware of. (The dam and pumping plant would operate as independent entities, with the dam administered by BuRec and the pumping plant by LADWP. How this might work out in practice is unclear.)

A 12-hours-on-12-hours-off schedule that balanced water inflows and outflows would also allow the Hoover dam to operate at around 50% rather than 20% capacity, although neither the electricity nor the water would necessarily be delivered when needed.

Finally comes the question of permitting. Permitting anything involving water use on the Colorado is problematic, and LADWP’s project has potentially serious environmental, economic and social impacts too numerous to discuss here. LADWP is further hampered by its previous actions in the area. As Cleantechnica puts it, Old Wounds Are Still A Problem:

When the LA Department of Water & Power elected to shut down a coal-fired generating station in Laughlin, Nevada in 2006, 500 people lost their livelihoods and the local economy was devastated. People haven’t forgotten. “There’s nothing going on in California with power that has given people who are dealing with them any comfort,” says Nevada senator Joseph Hardy. “I think from a political standpoint, we would have to allay the fears of California, Nevada and Arizona. There will be a myriad of concerns.”

Many people how live in the area or use the waters below the dam for sporting and recreational purposes are not thrilled about 20 miles of large diameter pipes cluttering up their view. And no politics in the American southwest are more fraught with conflict and danger than who gets to use the water in the lower Colorado River. Without that water, Phoenix and Los Angeles would shrivel back into desert communities. Farmers in both states are utterly dependent on water from the river for irrigation. LA officials will be pressed hard to prove their plan will not reduce the amount of available water.

Multi-state concerns. Federal jurisdictional issues. Old scores to be settled. Los Angeles has a tough road ahead if it wants to turn Hoover Dam into a giant battery.