WOW!! A BBC video about severe weather, and no mention of climate change: 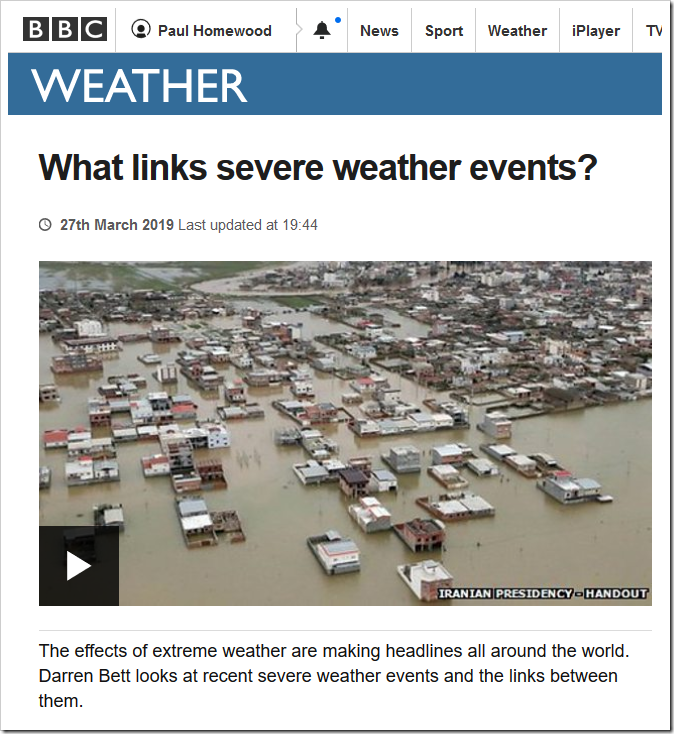 Off to the re-education camp for Darren Bett!

Final installment in my series on hurricanes and climate change.

Convincing detection and attribution of individual extreme weather events such as hurricanes requires:

Of the four hurricanes considered here, only the rainfall in Hurricane Harvey passes the detection test, given that it is an event unprecedented in the historical record for a continental U.S. landfalling hurricane. Arguments attributing the high levels of rainfall to near record ocean heat content in the western Gulf of Mexico are physically plausible. The extent to which the high value of ocean heat content in the western Gulf of Mexico can be attributed to manmade global warming is debated. Owing to the large interannual and decadal variability in the Gulf of Mexico (e.g. ENSO), it is not clear that a dominant contribution from manmade warming can be identified against the background internal climate variability (Chapter 4).

An assessment of whether any of the impacts of recent  U.S. landfalling hurricanes were exacerbated by global warming.

Part III: is there any signal of global warming in landfalling hurricanes and their impacts?

The Guardian hypes up the latest attempt to claim that climate change is making hurricanes worse: Climate changeworsened the most destructive hurricanes of recent years, including Katrina, Irma and Maria, by intensifying rainfall by as much as 10%, new research has found.

High-resolution climate simulations of 15 tropical cyclones in the Atlantic, Pacific and Indian Oceans found that warming in the ocean and atmosphere increased rainfall by between 5% and 10%, although wind speeds remained largely unchanged.

This situation is set to worsen under future anticipated warming, however. Researchers found that if little is done to constrain greenhouse gas emissions and the world warms by 3C to 4C this century then hurricane rainfall could increase by a third, while wind speeds would be boosted by as much as 25 knots.

“Climate change has exacerbated rainfall and is set to enhance the wind speed,” said Christina Patricola…

Jamal Munshi of Sonoma State University has sent me a copy of his latest paper, A General Linear Model for Trends in Tropical Cyclone Activity, published last June:

The ACE index is used to compare tropical cyclone activity worldwide among seven decades from 1945 to 2014. Some increase in tropical cyclone activity is found relative to the earliest decades. No trend is found after the decade 1965-1974. A comparison of the six cyclone basins in the study shows that the Western Pacific Basin is the most active basin and the North Indian Basin the least. The advantages of using a general linear model for trend analysis are described. 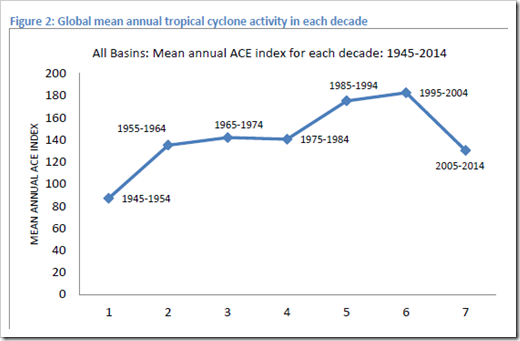