Summer sea ice loss is finally ramping up: first year is disappearing, as it has done every year since ice came to the Arctic millions of years ago. But critical misconceptions, fallacies, and disinformation abound regarding Arctic sea ice and polar bear survival. Ahead of Arctic Sea Ice Day (15 July), here are 10 fallacies that teachers and parents especially need to know about.

The cartoon above was done by Josh: you can drop off the price of a beer (or more) for his efforts here.

As always, please contact me if you would like to examine any of the references included in this post. These references are what make my efforts different from the activist organization Polar Bears International. PBI virtually never provide references within the content it provides, including material it presents as ‘educational’. Links to previous posts of mine that provide expanded explanations, images, and…

[Edit:  DMI has embedded their Ice Volume charts in the Thickness Chart, here:

Here’s the link to the DMI charts (click here):

So here’s the PIOMAS product.

A linear trend fit onto a naturally cyclical physical system is ridiculous.

So, here’s a crude hand-drawn curve to their product.  Different perspective.

Be wary of linear trend lines.

The primary feeding period for polar bears is rapidly drawing to a close in much of the Arctic, although it may continue for another few weeks in the farthest north. Mating is pretty much over as well, which means the polar bears’ need for abundant sea ice is declining even more rapidly than the ice does itself at this time of year.

Despite the fact that CO2 levels have now reached 415 ppm (see tweet below), sea ice is still pretty much as it was in 2006 when CO2 was about 385 ppm. In other words, the state of sea ice at this time of year – just over 12 million kilometres squared in 2006 and in 2019 – shows no correlation with rising CO2 levels. There is also not a hint of imminent catastrophe for polar bears anywhere within their range, despite the hand-wringing messages from conservation fear-mongers

Originally published May 1, 2019 in the Pacifica Tribune column What’s Natural by Jim Steele, republished here by request of the author.

When polar bear expert Mitch Taylor modeled populations in the Baffin Bay region (west of Greenland) in the 1980s, he estimated between 300 and 600 bears. Inuit hunters protested his estimates were far too low, and Baffin Bay’s hunting quotas far too small. So, Taylor and Inuit hunters sat together in “kappiananngittuq” to discuss their disagreements. The Inuit pointed out he surveyed during a time and in a place that overlooked a large portion of the population. Naturally, models driven by poor data always fail to model reality.

To Taylor’s credit, he redesigned his surveys based on hunters’ recommendations. The new survey tripled population estimates to over 2000 bears. Although a trend in the bear population could not be determined, it has been universally agreed that since the 1974 International Agreement for the Conservation of Polar Bears, polar bear populations were increasing due to better hunting regulations.

Of the 5 polar bear populations deemed to be declining by Canadian researchers, three declines were due to over hunting. Only two declines, such as western Hudson Bay, were possibly driven by global warming. Models suggested bears of western Hudson Bay were declining because warming was reducing sea ice. In 2013, extremist researchers like Andrew Derocher proclaimed, “All indications are that this population could collapse in the space of a year or two if conditions got bad enough,” and the media echoed ‘bears were on the verge of collapse’. Instead, that bear population has now increased. It is interesting to note the Hudson Bay is totally ice free every summer. So, does less summer sea ice truly hurt polar bears?

The claim that less sea ice will cause polar bears to go extinct is just one narrative, not tested science. From a historical perspective, Derocher’s claim that two-thirds of all polar bears could go extinct by 2030 is laughable. Numerous researchers have reported Arctic temperatures averaged about 3 degrees higher than today between 10,000 and 6,000 years ago and sea ice extent was far less for thousands of years. Clearly, polar bears did not go extinct, and history does not support Derocher’s narrative.

Conversely, there is solid evidence that thick ice is detrimental to seals and bears. Despite plenty of sea ice to hunt from, each winter all polar bears lose weight. Polar bears’ main prey is ringed seals, but bears have a very low success rate when hunting seals at their breathing holes. Polar bears feed most successfully from March to May when ringed seals birth their pups on the ice. Feasting on seal pups, bears can quickly quadruple their weight. After giving birth and molting, ringed seals leave the ice and migrate to the open ocean to feed and become quite inaccessible to bears for the summer. Recent reductions in sea ice from July to September are irrelevant for bears’ summer hunting success. But open waters do benefit seals and fish.

To remain in the Arctic all winter ringed seals must create several breathing holes. When new thin ice first forms, they bust out several breathing holes using their heads. As winter proceeds they gnaw and claw to keep their holes open. Wherever sea ice survives for several years it becomes too thick to create breathing holes. So, across the Arctic, regions of thick ice contain the fewest seals and fewest bears. In contrast, in the Hudson Bay where new ice must form each year seals and bears are abundant!

Because local ice conditions frequently change, polar bears do not defend territories. Instead bears are flexible and move great distances seeking out regions with more seals. One radio-collared bear was tracked moving from Alaska to Greenland during a summer.

When winds shift, thick sea ice can be blown out into the relatively warm Atlantic. This allows new ice to form which then can support more seals and more bears. Based on this basic biology, the Inuits’ narrative, “It is the time of the most polar bears” is best supported by scientific evidence.

In 2010 Nunavut’s Minister of Environment Daniel Shewchuk wrote, “Inuit hunters have a close relationship with the land and wildlife. They have observed that the overall population of polar bears in Nunavut is not declining as some suggest, but rather is thriving. No known environmental or other factors are currently posing a significant or immediate threat to polar bears overall. Furthermore, Inuit knowledge and science corroborate that the species can and will adapt to changing and severe climatic conditions, as it has done for centuries.”

The Inuit truly practice the concept of “it takes a village”. Hunters sit down in kappiananngittuq and respectfully share their observations of wildlife and their movements. Kappiananngittuq is the Inuit word for a “safe place to discuss”. Based on community discussions, Inuit have steadfastly claimed it is “The Time of the Most Polar Bears”. Overhunting has been one of the world’s greatest threats to wildlife. And the growing number of polar bears is testimony to wise hunting regulations now honored by the Inuit.

In contrast, based on questionable computer models, some western scientists have argued two-thirds of all polar bears will be extinct by the year 2030. Climate scientists like Gavin Schmidt sitting in his New York office, suggested the Inuit are in total denial. Sadly, in climate politics there is no kappiananngittuq where people safely discuss divergent knowledge. If you dare disagree with models of gloom and doom, you are attacked as an ignorant denier.

In part 2, I will present abundant scientific evidence supporting Inuit claims that it is the “time of the most polar bears”. But first I present an example of the Inuit’s amazing ability to correctly diagnose changes in Arctic wildlife populations. Kappiananngittuq discussions consistently resulted in accurate conclusions, far superior to western science.

Due to overharvesting during the early 20thcentury, Bowhead whales were undeniably on the brink of extinction. In response, commercial hunting of Bowheads along the Canadian Arctic was wisely banned in 1951. Inuit subsistence hunting continued until 1979 but was later prohibited. After extensive debate, a limited licensed subsistence hunt was eventually renewed in Nunavut in 1996.

When the Inuit first petitioned to hunt the Bowhead in the 1980s, scientists argued the Bowhead population had not yet recovered to the sustainable numbers needed to safely permit subsistence hunting. The Inuit insisted scientists grossly underrepresented the whale’s abundance due to faulty surveys. It is not exactly clear how the Inuit counted, but by compiling their community’s observations, they concluded there were three times more Bowhead than scientific models suggested.

Many non-Inuit were suspicious, insinuating Inuit estimates were a self-serving calculation driven by their desire to hunt more whales. Off-hand comments portrayed Inuit estimates as mere hunches lacking written documentation and verifiable observations. Inuit science was not considered on par with hi-tech calculations.

But scientific surveys frequently suffer from a wide range of biases and inaccuracies. Models are often just the best guesses of a small group of scientists that get translated into numbers and equations. The data that feed their models are often limited by scant observations.

In the 1970s, during the Bowhead’s spring migration, scientists perched on hilltops, or pressure ridges in the ice. They counted whales as they migrated north through the open-water “leads” along the north coast of Alaska. They erroneously assumed that when the winds changed and ice temporarily closed those leads, whales stopped migrating. Only after the winds again shifted and the leads reopened, did scientists continue their count. Based on such survey assumptions, scientists modeled that only 2000-3000 Bowhead whales existed. And such small numbers meant the whales were still endangered.

In contrast Inuit hunters had always ventured much further out on the ice. Based on experience, they argued that when open-water leads closed, the whale migration still continued. The swirling pack ice always generated chaotic but sufficient springtime cracks and leads, providing whales enough opportunities to breathe.

Bowheads also break relatively thin ice to make their own breathing holes. Whales were never restricted to large open-water leads along the coast. Thus, Inuit hunters argued the scientists had been blind to the majority of migrating whales. To their credit, western scientists re-designed their surveys to address the Inuit’s criticisms. The Inuit were proven correct, and amazingly had correctly calculated that Bowhead populations were 3 times higher than scientists had estimated. I suggest we all could benefit by debating kappiananngittuq style. 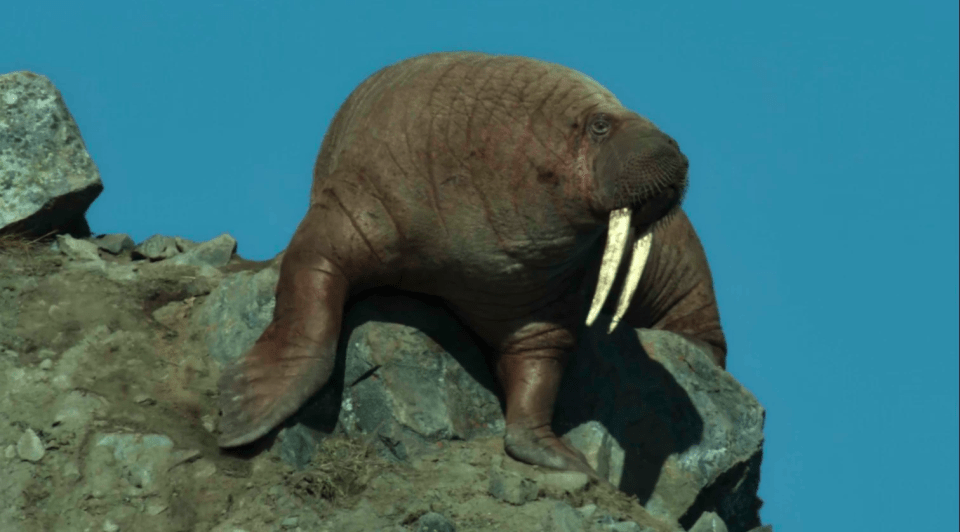 Our Planet has showcased hundreds of walruses falling off a 260ft cliff to a slow, agonising death in heartbreaking scenes

Last week, the new Netflix series, Our Planet, was launched with great fanfare. Narrated by David Attenborough, however, one segment made headlines around the world, showcasing hundreds of walruses falling off a 260ft cliff to a slow, agonising death in heartbreaking scenes.

Narrating the disturbing scene in the second episode, Attenborough began:

But the story quickly began to unravel.