In the 1990s, solar physicists, Penn and Livingston, called for a long decline in solar activity. This is the case and it is nice to see such work confirmed by events. Solar Cycles # 23 and 24 are the weakest since the early 1900s. The current run of consecutive Spotless Days is out to 33, or 75%, for the year.

So far this year, the count is out to 33 consecutive days, which is exceptional. So much so, that SILSO keeps a table of such long runs.

Solar Cycle # 24 is expected to reach its minimum by late in this year.

For hundreds of millions of years such changes in solar activity have been associated with changes from warming to cooling. And back again. The long run to the recent peak in activity was the strongest in thousands of years. Despite this, temperatures were not as warm for as long as set during the Medieval Warm Period. The end to that long trend and turn to cooling in the early 1300s was drastic, causing widespread crop failures and famine in Northern Europe and England. A book by William Rosen, “The Third Horseman” covers it thoroughly. The die-off from 1315 to 1320 is estimated at some 10 percent of the population. Deaths of cattle, sheep and horses were severe as well. All due to the turn to cold and unusually wet weather.

The change to what some are calling the Modern Minimum is significant. In geological perspective, it is now a built-in cooling force.

The next chart shows that the satellite record is again approaching the flat-lying trend, which is out to some 20 years. The El Ninos of 1998 and 2016 were distinctive weather- warming events.

NOAA’s Winter Forecast made on October 18th has been wrong on temperature and precipitation. North America has suffered a cold, snowy and lengthy winter, beyond what could be blamed upon the demon “Polar Vortex”.

Over time, diminishing solar activity has been likely to be accompanied by more cosmic rays and more cloud cover. Which would be associated with cooler and snowier winters. And possibly cooler summers, which the Danish Met Institute reported for 2018 and 2017.

Deaths attributable to cold weather in Southern New England are over 2 orders of magnitude larger than deaths attributable to warm weather. Further, projections of future temperature increase due to global warming will bring a net savings in human lives! https://t.co/INcec9V9TBpic.twitter.com/BtuNskuKv4 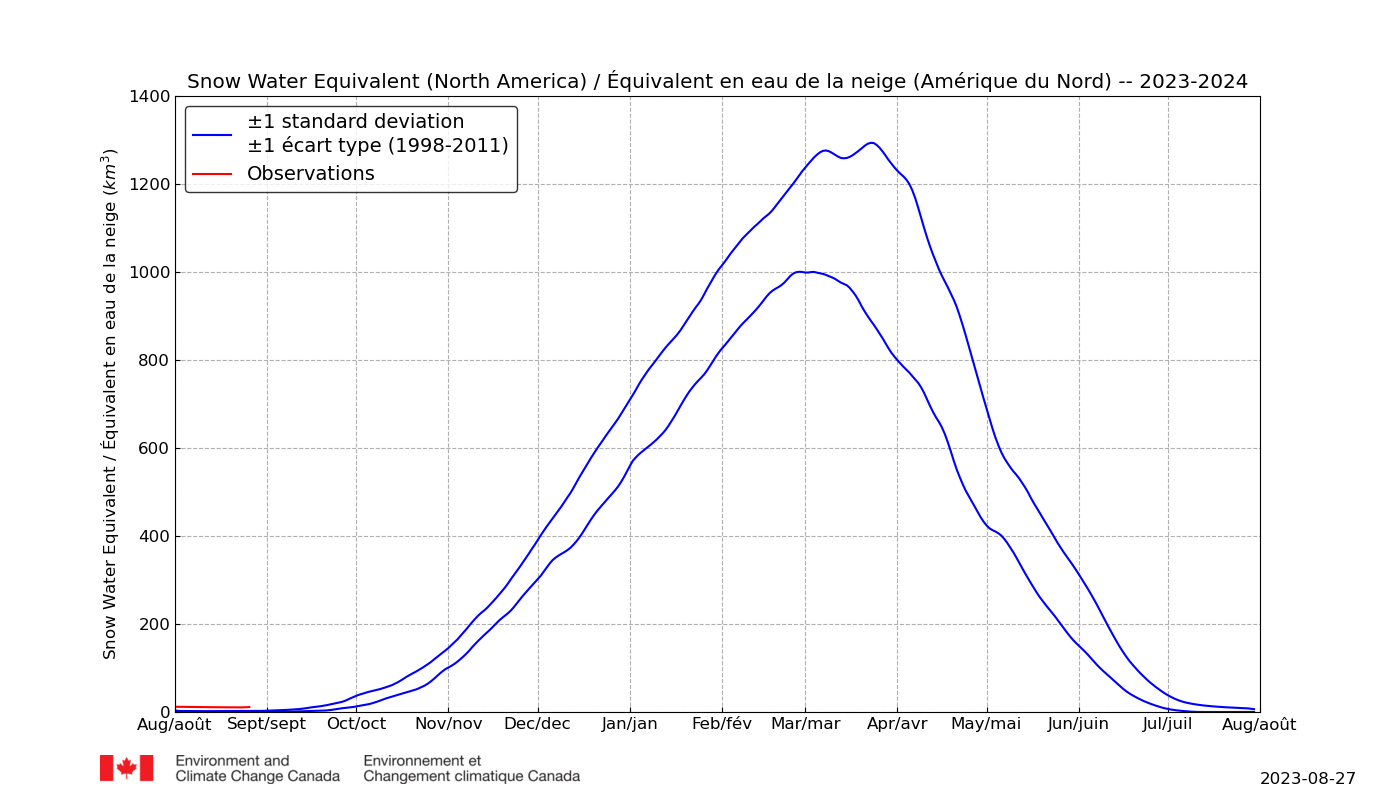 I ran into a lot of maps and folks showing them in web pages when I searched on “Ice Age Glacial Map”. They show an interesting image of the world as it was, that is likely how our world will become. Remember that the Glacial mode takes 100,000 years to reach maximum extent. It can become very cold inside 20+ years, but forming a mile high glacier is a mass-transport problem and is rate limited by snow rates. So while many of these maps show the “end game”, there’s a LOT of time to get there. About 20 years to get cold (perhaps already in progress…). Then the glacier advances, on average, about 800 feet / year. One short stroll on one Saturday per year keeps you ahead of the glacier (though you might need to do one / month in some years and none in others).

First up, this map showing what the natural plant life was like:

Click to embiggen greatly. Note that the type 26 Grey is ice. Switzerland has an issue as there’s an ice cap there too. Then type 15 is Polar & Alpine Desert. Not going to grow a lot of food there. Type 16, that pink / magenta color, the Temperate Desert and type 7 the light tan Tropical Extreme Desert also cover lots of the planet and don’t grow much of use. There are other semi-desert and similar low productivity areas too.

The bottom line is that Russia, Canada, and all of North and Eastern Europe are toast (or ice…) and will need to find a new place to live. Then Africa doesn’t have much where they can actually grow any crops, so that Billion people? Um… China, out back, gets demolished, but the more southern and coastal areas survive – but on what food? South East Asia is OK, while Northern Australia gains a bunch (as long as they can keep the invasion out…). South America loses the Argentine production, Brazil does OK, with a loss of a lot of forest, the Andes gets a giant ice cap so those Nations will have big issues (Many present cities are at altitude to avoid the tropical heat…).

Which leaves us with the USA. We don’t do too badly, in comparison. We lose the Canadian Border States to some extent, but that’s likely thousands to 10s of thousands of years in the future; as it takes a long time for that ice sheet to form. We’ll be able to grow “Canadian like” crops there for a good while. Looking across from West to East most of the land is: 18 dark gray Forrest Steppe, 12 dark red Semi-Arid Temperate Woodland Scrub (not that much of the western desert goes this way), 21 dark blue Sub-Alpine Parkland, 23 olive green Temperate Steppe Grassland, 24 purple Main Taiga, 11 brown Open Boreal Woodland, and in Florida 12 red Semi-arid Temperate Woodland or Scrub. Pretty much all of that is “farmable” in one way or another.

Of note, Taiga is an interesting land vegetation type:

The taiga is the world’s second-largest land biome. In North America, it covers most of inland Canada, Alaska, and parts of the northern continental United States. In Eurasia, it covers most of Sweden, Finland, much of Norway, some of the Scottish Highlands, some lowland/coastal areas of Iceland, much of Russia from Karelia in the west to the Pacific Ocean (including much of Siberia), and areas of northern Kazakhstan, northern Mongolia, and northern Japan (on the island of Hokkaidō). However, the main tree species, the length of the growing season and summer temperatures vary. For example, the taiga of North America mostly consists of spruces; Scandinavian and Finnish taiga consists of a mix of spruce, pines and birch; Russian taiga has spruces, pines and larches depending on the region, while the Eastern Siberian taiga is a vast larch forest.

A different use of the term taiga is often encountered in the English language, with “boreal forest” used in the United States and Canada to refer to only the more southerly part of the biome, while “taiga” is used to describe the more barren areas of the northernmost part of the biome approaching the tree line and the tundra biome. Hoffman (1958) discusses the origin of this differential use in North America and why it is an inappropriate differentiation of the Russian term. Although at high elevations taiga grades into alpine tundra through Krummholz, it is not exclusively an alpine biome; and unlike subalpine forest, much of taiga is lowlands.

So, essentially, much of the Heartland becomes Sweden / Canada / Siberia. Not great, but people do live there. Not going to get 2 or 3 crops a year of corn and soybeans, but… well, Kale IS edible ;-‘)

The map is from: http://wiki.iceagefarmer.com/wiki/Main_Page that has a fascinating story of a very special chicken. As I’m fond of heirloom farm species selected for particular conditions, this interested me:

Want a chicken that does well in the cold? Here’s your chicken:

The Story of Icelandic Chickens

Icelandic chickens originated with the settlement of Iceland in the tenth century by the Norse, who brought their farmstead chickens with them. (In Iceland they are known as Íslenska landnámshænan or “Icelandic chicken of the settlers.”) Over the centuries, selection favored breeders capable of feeding themselves on Icelandic smallholdings, and hens with reliable mothering skills. The result was a landrace of active, naturally healthy fowl adapted to harsh conditions, on the small side (mature cocks weigh 4½ to 5¼ pounds; hens, 3 to 3½ pounds), with good egg production, even in winter. (A landrace is a group of domesticated stock selected for utilitarian traits only—not to conform to specific breed standards, such as for color, pattern, or comb style.)

For a thousand years, the only chickens in Iceland were of this robust landrace. But the 1930s brought importations of strains of Leghorns for more commercial egg and chicken production. Inevitably, those chickens were crossed with the natives—the pure landrace was in danger of being lost. Efforts to conserve the native population began in the 1970s. The success of those efforts was followed by importation of these genetically priceless birds into other countries, including the United States.

Had I a small holding on a mountain somewhere with occasional snow, I’d be getting a small flock of these guys going now.

It looks to me like that vegetation map is a bit optimistic about Tibet:

Also click to embiggen greatly. Note the big gray blob over Tibet / North India. Compare that to a night light map of India and you see a lot of folks live in that cooler areas up the mountains. That’s gonna be a problem…

There’s a fair number of interesting maps at these links:

A different set of maps. In particular there is a set of maps of the UK showing change of ice cover over the years from about 27 ky BP to 27 ky BP. It is likely that the series, run backwards and a bit slower, would show the future of the UK. 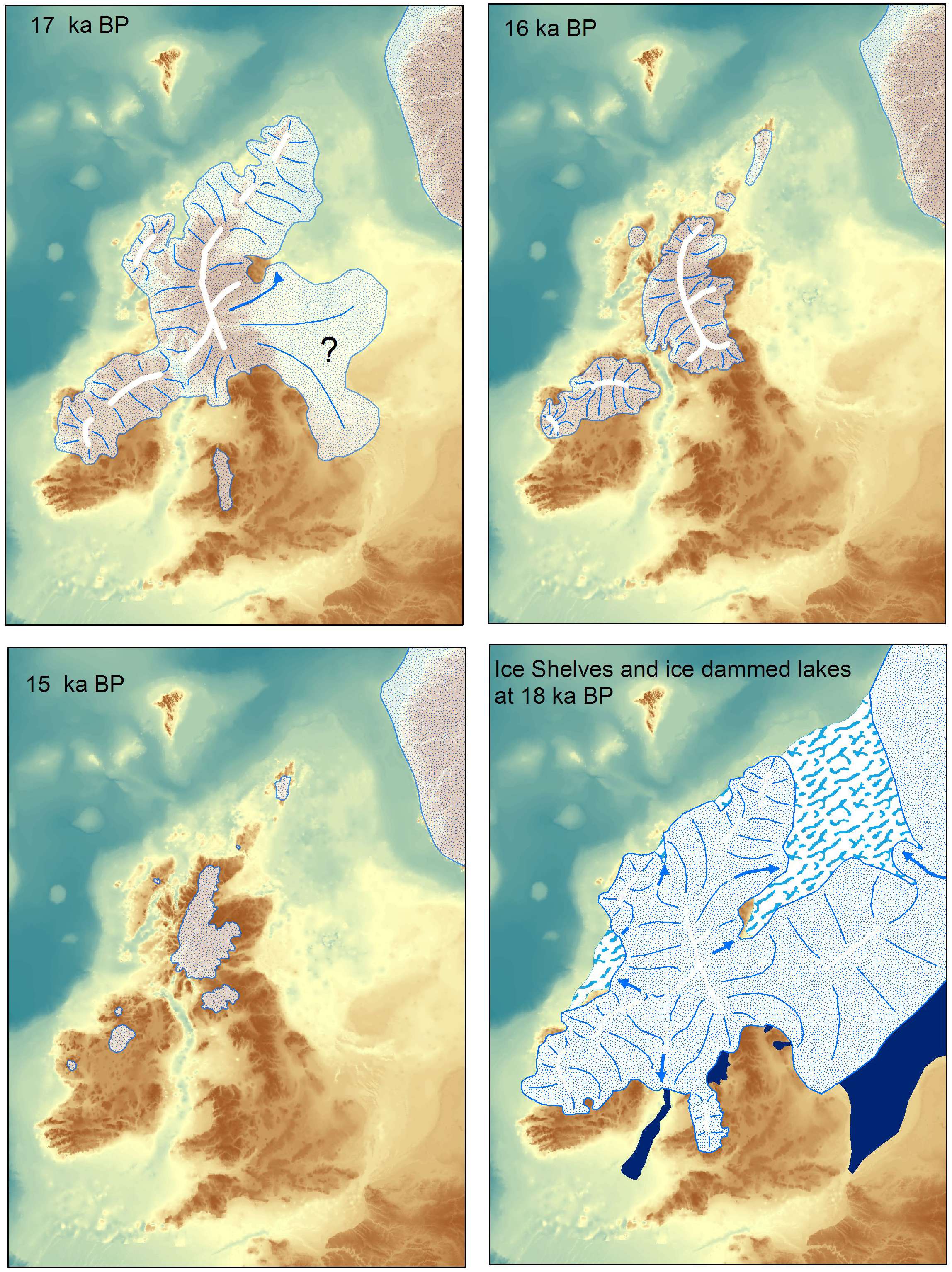 Recent Years in the UK end of Glaciation 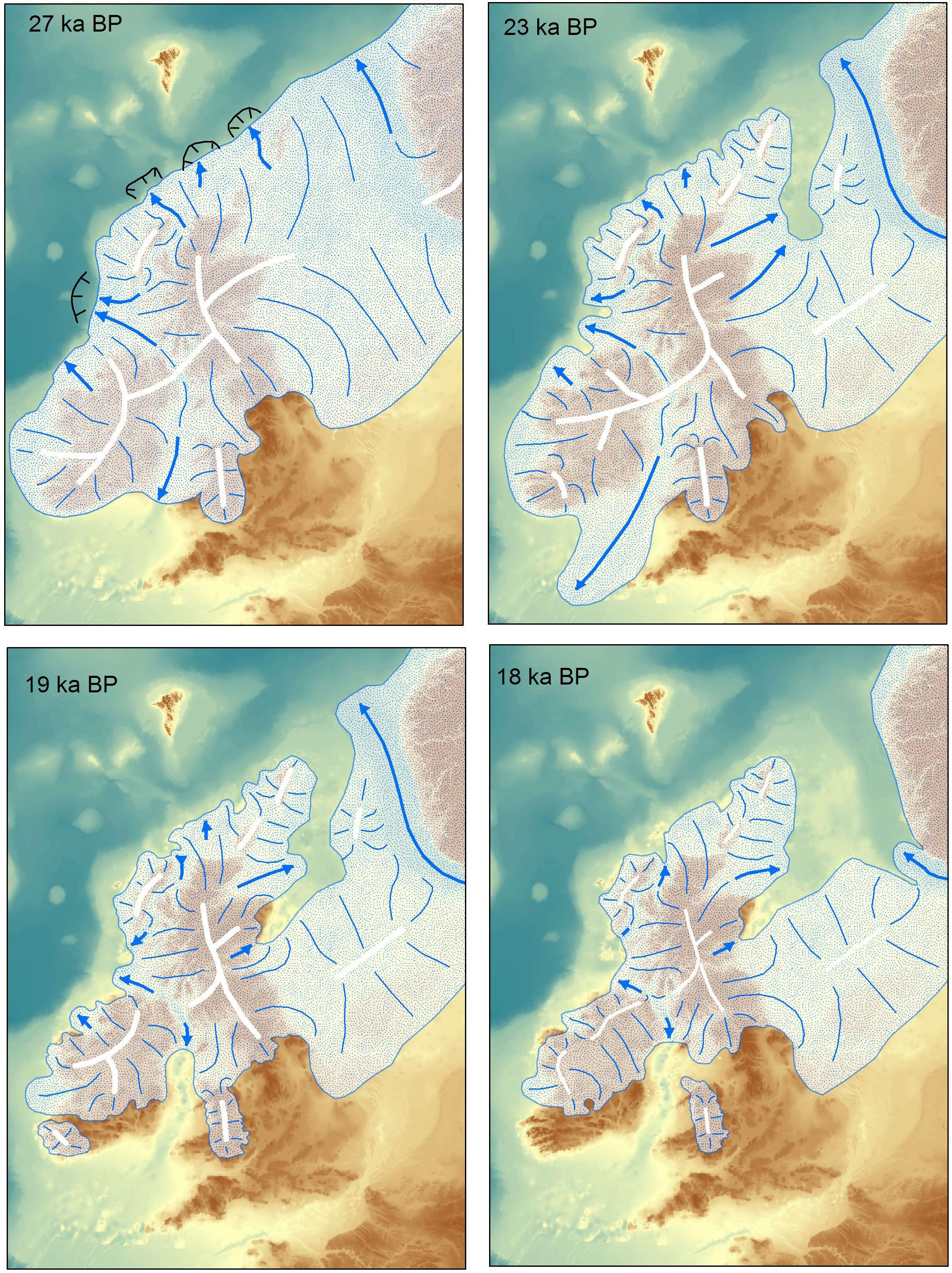 Has some interesting maps like this one showing how screwed Europe will be:

In particular, notice the scattered Ice Caps of Glaciers over the mountain tops, and how much is non-farmable “tundra”. Europe is dead other than the old Neanderthal stomping grounds in Spain / France and the Mediterranean areas with lots of water contact in Italy / Greece. So get that Italian Villa now 😉

And he has attribution for where he got things so lots of opportunities to “dig here” and find more maps, so for that one:

The Glacial Max Wiki has a different vegetation map in it.
https://en.wikipedia.org/wiki/Last_Glacial_Maximum 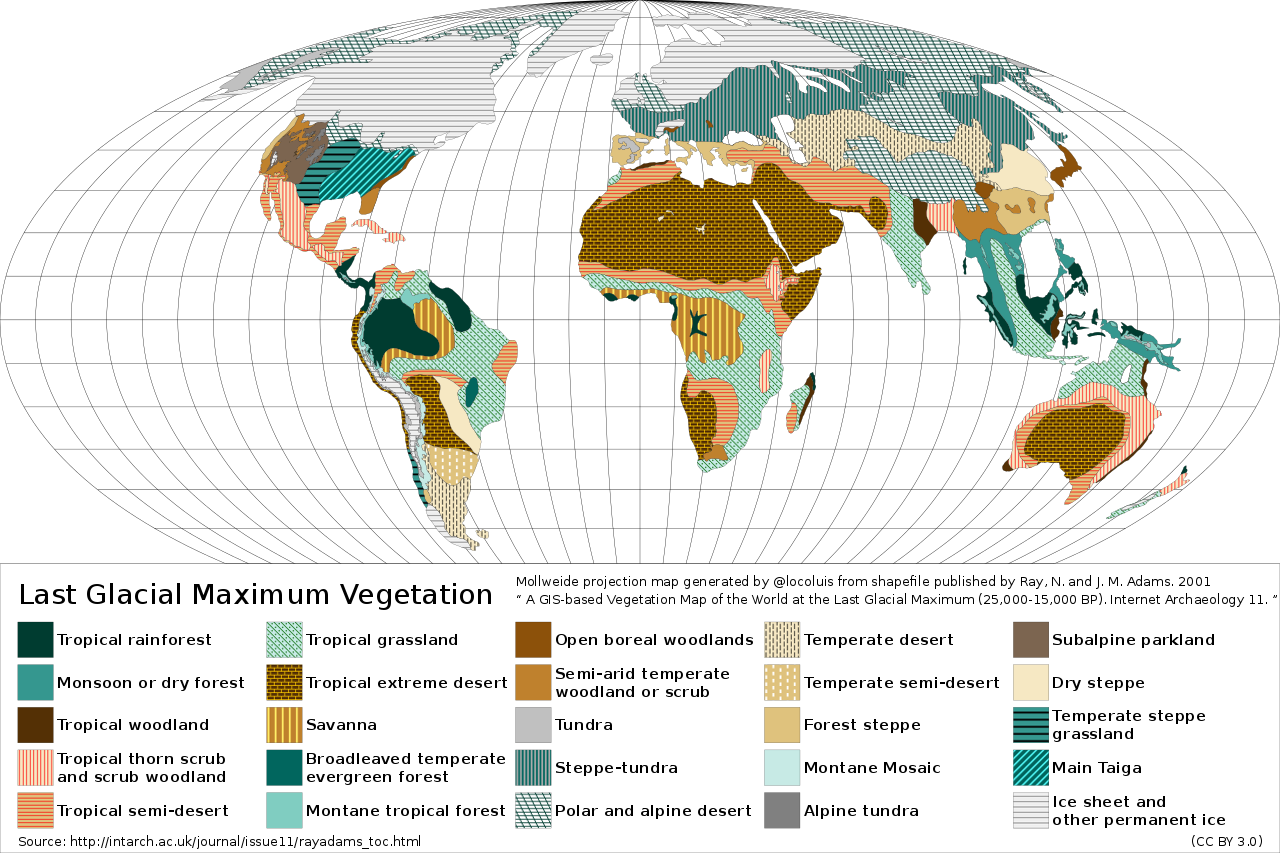 So there you go. Pick your place and make your plans. Me? I’m going to Florida… But don’t wait too long, it could start any millennium now… 😉

Note on the chart:  The time series average and range between ±1 standard deviation (calculated for 1998/99 to 2011/12) shows how current conditions compare to historical variability.

Note 2:  Here’s the link to the Environment and Climate Change Canada site (they just had to throw in Climate Change): https://www.ccin.ca/ccw/snow/current