Nicholas Lewis gave a keynote lecture with the Title “How sensitive is the climate to greenhouse gases?” – Is it really necessary to reach zero emissions in 2050? At our “Ontgroeningsdag” event on 7 March 2019 in Amsterdam. Video follows.

Reblogged from the GWPF:

Chinese climate scientists are clearly off-message. They keep referring to the global warming hiatus which so many scientists and activists – those who shout on twitter and prowl the comment sections of off-colour articles on the subject – know has been trounced and discredited again and again. They clearly ought to have a word with the emerging science powerhouse that is China.

Writing recently in “Science of The Total Environment,” Li and Zha of Nanjing Normal University, say the global hiatus has played a prominent role in their thinking and they see it reflected in China. Using satellite data they found a hiatus in China between 2001-15. They found warming in western and southern China and a 15-year cooling trend in northern China. For China as a whole they estimate that the warming rate is just -0.02°C per decade. They conclude that, “there is a regional warming hiatus, a pause or slowdown in China, and (it) implies that greenhouse gas induced warming is suppressed by other natural forcing in the early 21st century.”

There is also Li et al writing in Climate Dynamics who are a little more forceful saying, “since the late 1990s, the global warming has ground to a halt, which has sparked a rising interest among the climate scientists. The hiatus is not only observed in globally average surface air temperature, but also in the China winter air temperature trend, which turns from warming during 1979-1997 to cooling during 1998-2013.” They attribute the effect to the melting of Arctic sea ice.

Gan et al (Lanzhou University and South Dakota State University), reporting in Earth and Space Science say that the hiatus, if not cooling, is seen over the Northern Hemisphere finding that the daily temperature minimum experienced an “obvious” decline in North America during the warming slowdown period. They relate the changes in daily temperature minimum to the Atlantic Multi-decadal Oscillation.

Looking at East Asian surface temperatures Xie et al in Climate Dynamics suggest that the effect of the North Atlantic Oscillation, operating through its influence on the African-Asian multi-decadal teleconnection pattern, will mean that East Asian surface ait temperatures will remain at their current levels or slightly cooler between 2018 -2034, and will then increase.

Elsewhere in the world Wanatabe et al in Nature Scientific Reports say that the Indian Ocean Dipole – an inter-annual mode of climate variability in the Indian Ocean – has intensified with 20th century global warming. However, the data shows a global-warming hiatus between the late-1990s and 2015. They say it is presently unclear how this global warming hiatus, as they put it, will affect regional ocean parameters.

All of these interesting papers come from mainstream journals, and all are food for thought. The so-called hiatus in global temperature is illuminating, significant and real.

Here are two very good videos per issues in the Temperature Record.

The first, at 15 minutes, is a short overview of motivations of government employee “science” and some of the issues involving just how unimportant any actual warming might be. Touches on the point that government only gets what it pays for, and it pays for alarmist results. By Roy Spencer at “America First Energy Conference”. Titled “Climatologist Roy Spencer – The Bias In Climate Science”.

The second is longer, at about 53 minutes. By Tony Heller and titled “Evaluating The integrity Of The Official Climate Records”; it has a great set of A/B comparisons of what they said then vs now. Demonstrates graphically the way that the past is “mailable” in the hands of NASA / NOAA / IPCC. It is from 2 years ago, and similar to his other presentation from last year, but still good. In particular, at the Q&A part, he tells how he digs up all those lovely old news articles about the very hot 30’s and the very cold 70’s. Useful information, that.

From the Illinois State Climatologist:

Champaign, Ill., 3/6/19: An Arctic outbreak in late January 2019 led to widespread bitterly cold temperatures across much of the Upper Midwest, including Illinois. On the morning of Jan. 31, the cooperative weather observer at Mt. Carroll, located in Carroll County, reported a temperature of -38 degrees.

After a comprehensive review, the State Climate Extremes Committee (SCEC) unanimously voted to validate the -38 degrees reading as the new official state record minimum temperature. This committee ensures that the observation is meteorologically plausible, is within a range that the reporting instrument can detect, and that the instrument is in proper working order.

The previous minimum temperature record for Illinois was -36 degrees set in Congerville, located in Woodford County, on Jan. 5, 1999. The coldest temperature prior to the Congerville record, -35 degrees, was also set at Mt. Carroll in January 1930, and was later tied with Elizabeth in February 1996.

The Mt. Carroll station is a traditional daily observing station located in northwestern Illinois. It has been in service, with minor interruptions, since 1895, and has been observing temperatures since 1897. It is operated by the City of Mt. Carroll and attended by staff at the city’s water treatment plant.

You can view the final report on the NCEI website here: https://www.ncdc.noaa.gov/extremes/scec/reports

A complete list of current state records can be found here:
https://www.ncdc.noaa.gov/extremes/scec/records/IL

[HiFast note:  This station is at about 740′ elevation in a creek bed draw at the town’s sewage treatment plant (coords: 42.0981 -89.9842).  The Stevenson screen is next to a prepared (concrete?) path and appears to be less than 20 feet from structures including a settling/aeration basin.  Not optimally sited.]

Convincing detection and attribution of individual extreme weather events such as hurricanes requires:

Of the four hurricanes considered here, only the rainfall in Hurricane Harvey passes the detection test, given that it is an event unprecedented in the historical record for a continental U.S. landfalling hurricane. Arguments attributing the high levels of rainfall to near record ocean heat content in the western Gulf of Mexico are physically plausible. The extent to which the high value of ocean heat content in the western Gulf of Mexico can be attributed to manmade global warming is debated. Owing to the large interannual and decadal variability in the Gulf of Mexico (e.g. ENSO), it is not clear that a dominant contribution from manmade warming can be identified against the background internal climate variability (Chapter 4).

An assessment of whether any of the impacts of recent  U.S. landfalling hurricanes were exacerbated by global warming.

Discussions and arguments concerning global warming/climate change often get into the issue of discerning the longer term signal within the shorter term noisy temperature records. The effort to separate natural and human forcings of estimated Global Mean Temperatures reminds of the medieval quest for the Holy Grail. Skeptics of CO2 obsession have also addressed this. For example the graph above from Dr. Syun Akasofu shows a quasi-60 year oscillation on top of a steady rise since the end of the Little Ice Age (LIA). Various other studies have produced similar graphs with the main distinction being alarmists/activists attributing the linear rise to increasing atmospheric CO2 rather than to natural causes (e.g. ocean warming causing the rising CO2).

This post features a comment by rappolini from a thread at Climate Etc. and Is worth careful reading. The occasion was Ross McKitrick’s critique of Santer et al. (2019) that claimed 5-sigma certainty… 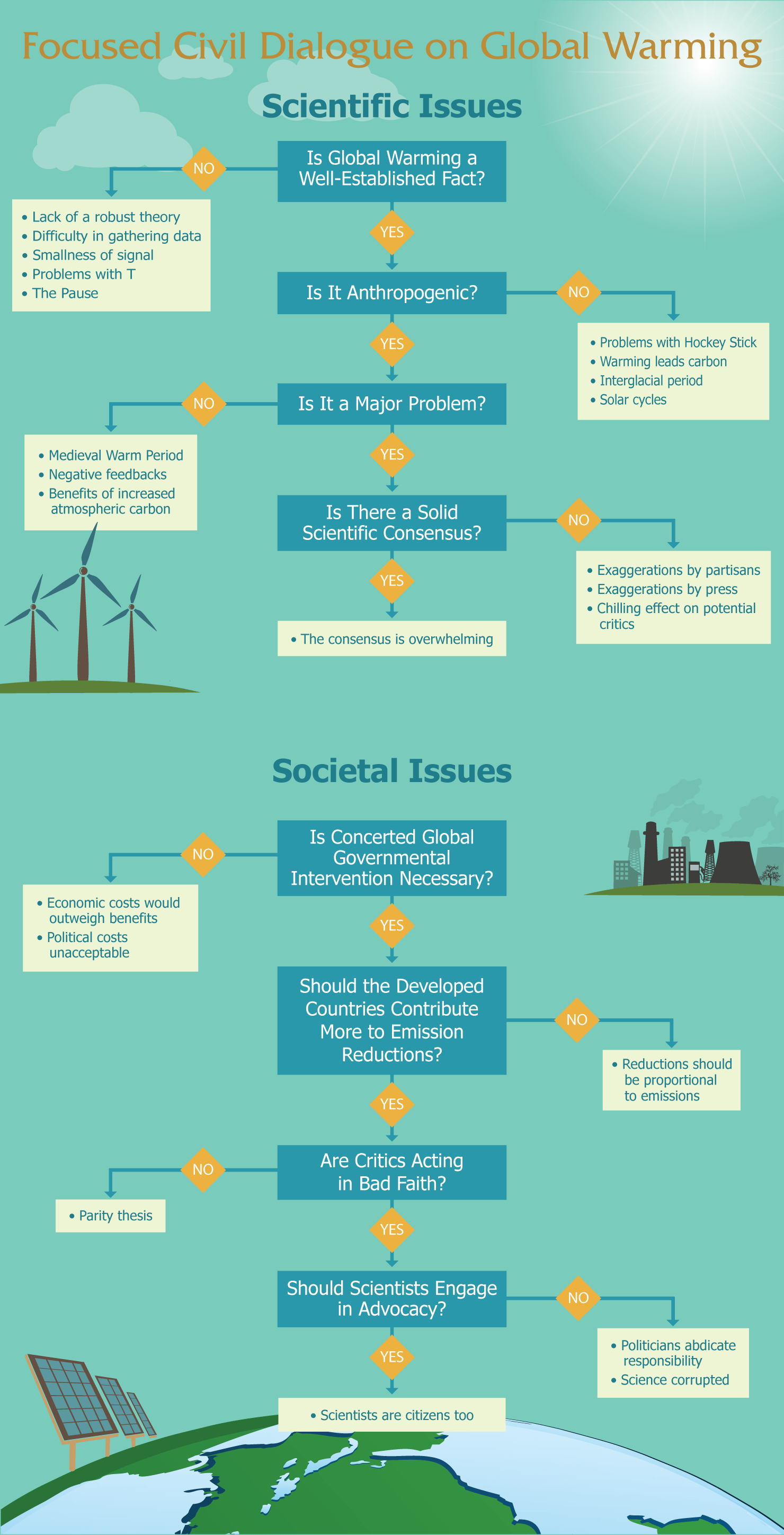 This dialogue framework was proposed for a debate between William Happer and David Karoly sponsored by The Best Schools.  As you can see it reads like an high hurdle course for alarmists/activists.  There are significant objections at every leap in connecting the beliefs.

Happer’s Statement: CO₂ will be a major benefit to the Earth

Earth does better with more CO2.  CO2 levels are increasing

Atmospheric transmission of radiation: Tyndall correctly recognized in 1861 that the most important greenhouse gas of the Earth’s atmosphere is water vapor. CO2 was a modest supporting actor, then as now.

Radiative cooling of the Earth: Clouds are one of the most potent factors controlling Earth’ s surface temperature.

The Schwarzschild equation:  The observed intensity I of upwelling radiation comes from the radiation emitted by the surface and by greenhouse gases in the atmosphere above the surface. The rate of change of the intensity with altitude…

We define “warming” as a positive rate of temperature change over time. According to the main hypothesis, warming since 1951 has been due almost exclusively to the increase in GHGs (greenhouse gases), of which CO2 is the most important one. The IPCC does not find anything else that has contributed to the observed warming.

The rate of CO2 change (the atmospheric increase in CO2 every year) has been increasing almost linearly since 1959 and is currently ~2.4 ppm/year.

But the hypothesis doesn’t fit the observations. The HadCRUT 4 rate of temperature change (°C/year) is no longer increasing. In fact, it stopped increasing ~1994 and has been decreasing since. Global warming has been decelerating for over 20 years despite CO2 levels increasing at the same rapid rate.

Since 2017, the rate of temperature change has become negative.

The global warming deceleration since 1994, and cooling since 2017 are incompatible with the hypothesis that the increase in CO2 is driving global warming. Other factors must be more important than CO2.