Robert Rhode has produced a very nice animation of global temperatures as a function of CO2 levels in the atmosphere. Of course it is designed for public relations purposes in order to show increasing CO2 causes warming.  He even uses absolute temperatures which are not even directly measured. Here is my version of how temperature anomalies depend on CO2. 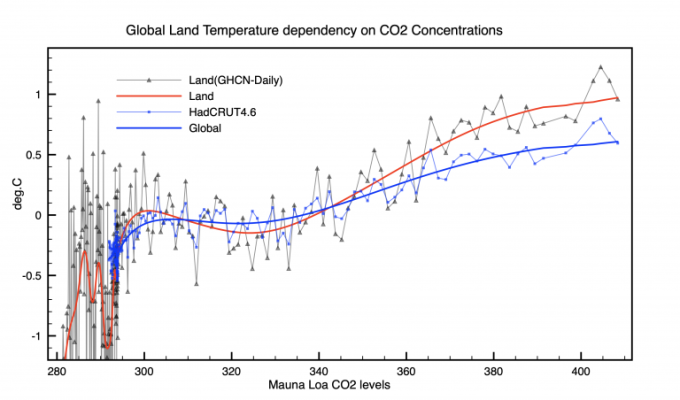 After a rather uncertain temperature rise from pre-industrial (280ppm) temperatures, there is a long period with no net warming between CO2 levels of 300 to 340 ppm, corresponding to the  period ~1939 to ~1980. Warming then continued as expected but then began tailing off towards a logarithmic dependency on CO2.

This formula is in reality a fit to some rather complex line by line radiative transfer calculations by hundreds of vibrational excitation states of CO2 molecules for absorption and re-emission of infrared radiation .  I have perviously described my own calculation of this radiative transfer and how you can fit a logarithmic dependency to it. The physical reason why increasing CO2 apparently produces a logarithmic forcing is that the central lines rapidly get saturated way up into the stratosphere, the strongest of which can then even cause cooling of the surface. Overall net warming is mostly due to strengthening of the weaker peripheral excitation  levels of the 15 micron band. 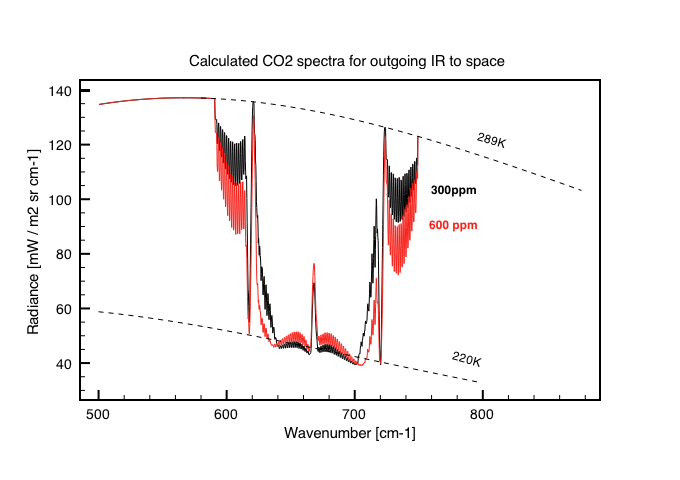 The net effect produces an apparent ‘logarithmic’ dependency, that I also calculated, and which is very similar to that of Myhre et al. Notice also how 3/4 of the “greenhouse” effect from  CO2  kicks in from zero to 400ppm. 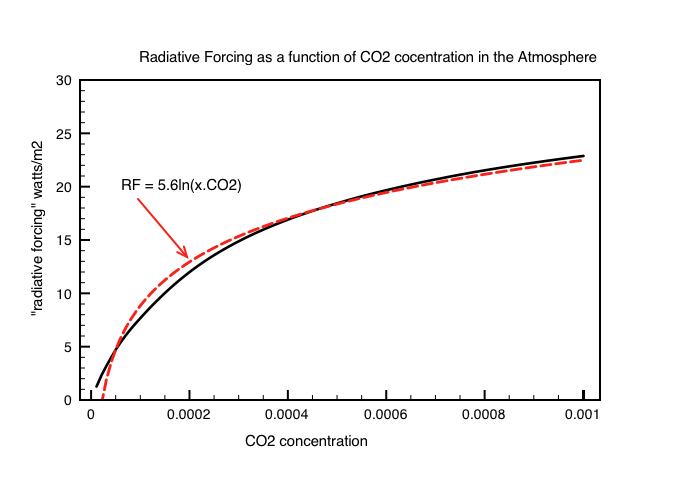 The effect of increasing CO2 is to raise the effective emission height for 15micron IR radiation photons. The atmosphere thins out with height according to barometric pressure, and eventually the air is so thin that IR photons escape directly to space, thereby releasing energy from the atmosphere. Some IR frequencies can escape directly to space from the surface (the IR window). Others escape from cloud tops or high altitude water vapour and ozone.

The loss of energy from the top of the atmosphere drives convection and evaporation which is the primary heat loss from the surface. This process also drives the temperature lapse rate in the troposphere without which there could be no greenhouse effect. The overall energy balance between incoming solar insolation and the radiative losses to space determines the height of the tropopause and the earth’s  average temperature. A small sudden increase in CO2 will slightly reduce the outgoing radiative loss to space, thereby  creating an energy imbalance. This small energy imbalance is called “radiative forcing”. The surface will consequently warm slightly to compensate, thereby restoring the earth’s  energy balance.

This effect can be estimate from Stefan Boltzman’s law.

and an effective insolation area of the earth of

A steeper slope would be expected with net positive feedbacks

Figure 2 shows HadCRUT4.6 and my version of GHCNV3/HadSST3 plotted versus CO2 and compared to a logarithmic Temperature Dependence. 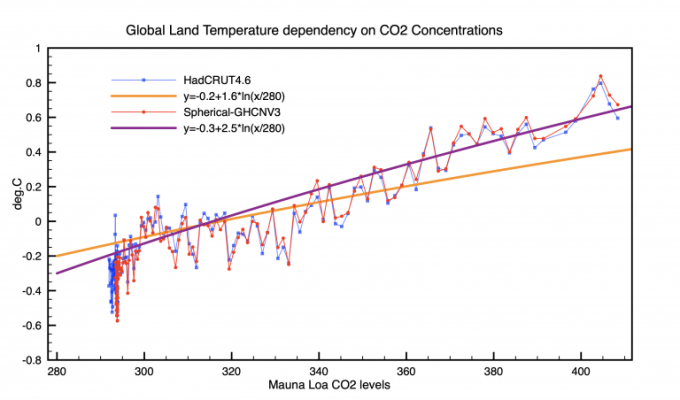 There is still a discrepancy in trends before CO2 reaches ~340ppm but thereafter temperatures follow a logarithmic increase with a scale factor of about 2.5. This implies a climate sensitivity (TCR) of about 1.7C .